Wondering Around Wandering is a huge, vibrant pop-up art gallery in a former iron-working factory in Crown Heights, run by artist and designer Mike Perry. Inspired by the publication of his monograph (also called Wondering Around Wandering), the gallery was funded through Kickstarter as a way to celebrate the book’s publication while also creating a fun, free space for people to appreciate art and make things together.

The gallery is open during the days—the permanent collection is Mike’s, and there have been several rotating group shows—and there are a slew of free events, like dance performances, drink-and-draws, and zine-making workshops. Coming up is an art salon with Moleskine, a collaging workshop, an animated-film screening, and more. But hurry! The gallery will only be around until November 20. 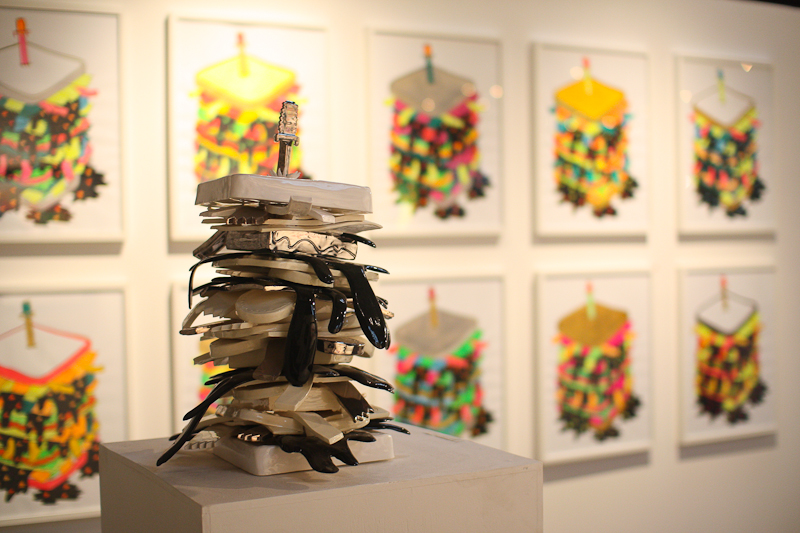 Braving wind & rain, Jillian Steinhauer of Hyperallergic and I went to hang out with Mike and talk about this crazy project on the afternoon Hurricane Sandy was supposed to hit. (We even made it home in time for last-minute grocery shopping!) 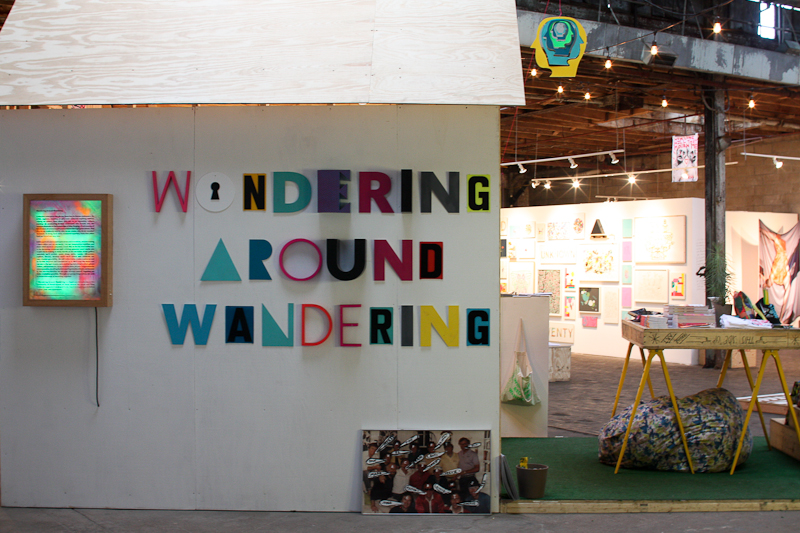 brooklyn spaces: What made you want to do this?
mike: Well when the book came out, it was really exciting and big, and I wanted to do something that was even bigger to celebrate it. I figured I should have a show, but then I started thinking about what expectations I would have for the space: I’d want it to be communal, I’d want it to be open, I’d want it to be free. A friend of a friend works at Kickstarter; her whole job is to find artists who don’t use Kickstarter but should. 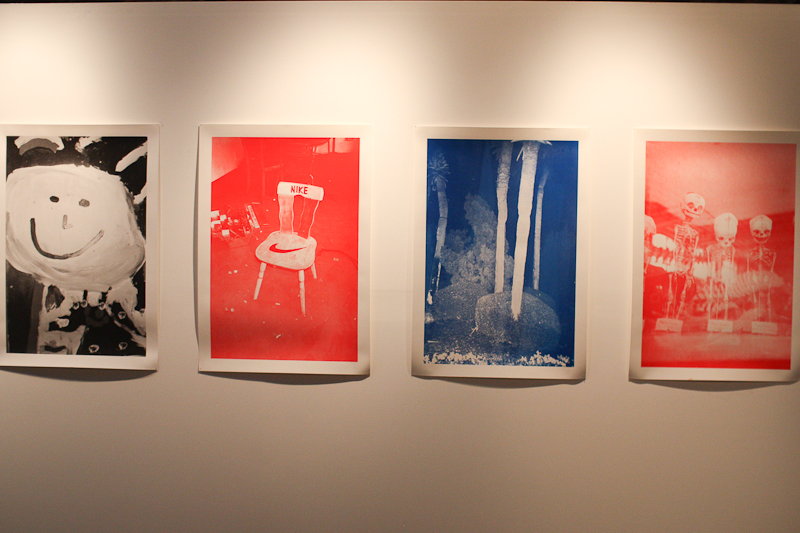 brooklyn spaces: What an amazing job.
mike: Right? Just convincing artists that they should make money.
hyperallergic: Artists need that.
mike: Big time. And doing the project that way was brilliant, it really focused my ideas in a way that made this much easier to pull off, because it wasn’t somebody being like, “Here’s some money, figure it out!” I had a plan, there were goals and steps, I knew how to put it all together. When the Kickstarter ended, I walked over here and paid the landlord and started this journey. 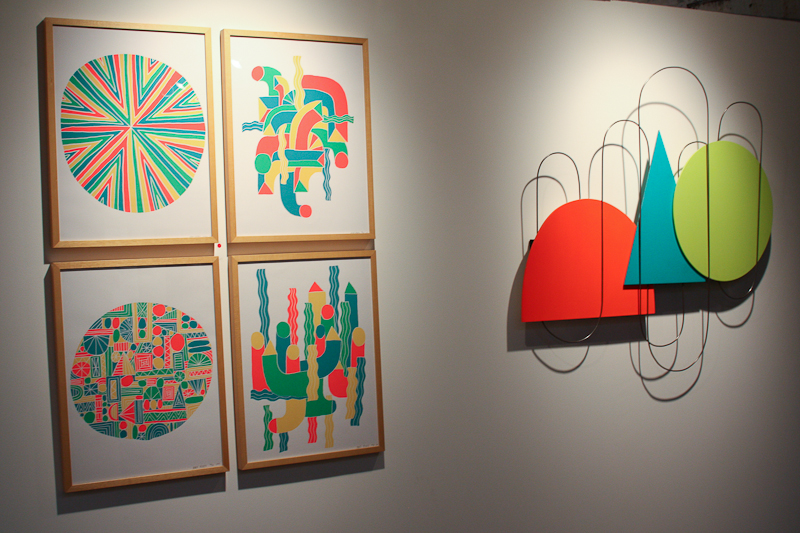 hyperallergic: What was the space like when you got here?
mike: It was a total shitshow. I think they’d just been storing and dumping junk in here for like thirty years. So I hired a bunch of people, my brother-in-law came out, friends in the neighborhood, it was very communal. My friend J. is the architect, he makes everything happen. Kevin, who owns a candy store up the street, he’s like the neighborhood electrician, he came and wired everything. My friend Masha, I went to her and said, “I need a producer, someone who can line things up and cross them off the list.” Fiona, who works in the gallery now, first came to interview me for a personal project, and it was one of those days that was just so crazy, I was covered in dirt and I’d had so much coffee, and after the interview she was like, “You need help. Can I come help you?” We have so, so many people, it’s just a massively beautiful, heartwarming experience. We had this huge opening, I think we had 700 people in here. And the next day we came back and regrouped and said, “That was insane. This is just the beginning.” 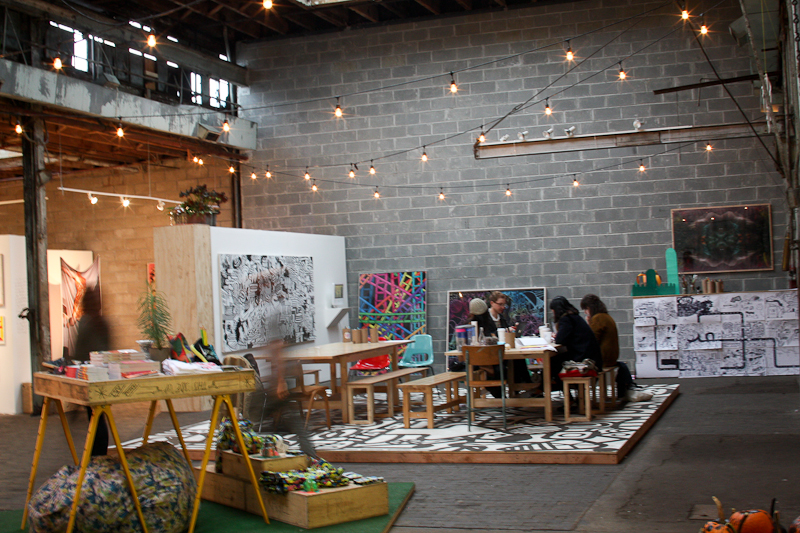 brooklyn spaces: Does this make you want to find ways to do this all the time, or to never do something like this again?
mike: You know, I’m still not sure. It’s such a major commitment, but it’s so incredibly gratifying. Yesterday we had about a hundred kids in here for pumpkin-painting, and it’s like, this is why you have a space, this is what you should do! But at the same time, it’s really hard for me to go to my studio and do work. Sometimes I wish I wasn’t an artist because I can’t do both, I can’t be the advocate and the creator at the same time. 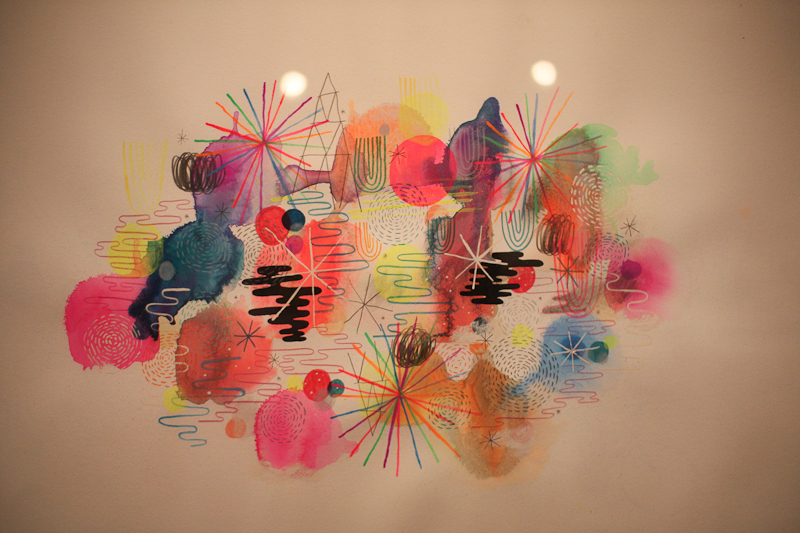 brooklyn spaces: The only other thing I can think of that’s like this is the Brucennial. Did you take a cue from other big collaborative art shows like that?
mike: Well there really aren’t a lot of galleries or institutions like this. Giant Robot was a great resource but that closed down. Some friends of mine run a terrific space in Greenpoint called Beginnings, but that just opened. There aren’t even that many zine stores anymore, other than Printed Matter. There used to be so many of them and they’ve all gone away because the audience doesn’t invest in them. Making art is really satisfying, and people love art and believe in it, but they don’t do enough to support it. Last year, every present I bought for anybody was art. Because then you serve two people: the person who gets the piece and the person who made it. If creative people don’t support each other, who’s going to support us? 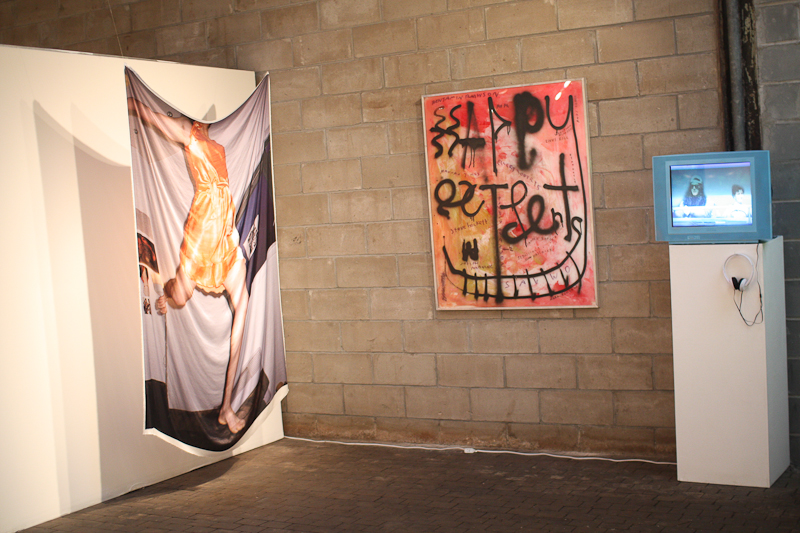 brooklyn spaces: Do you feel that being in Crown Heights has an effect on the space?
mike: That was the exciting part about realizing that this was what I wanted to do: finding something that’s missing in the neighborhood and trying to provide it. I meet new people here every day. The neighborhood becomes more interconnected and more exciting every second. It’s going to be really sad when the project is done. 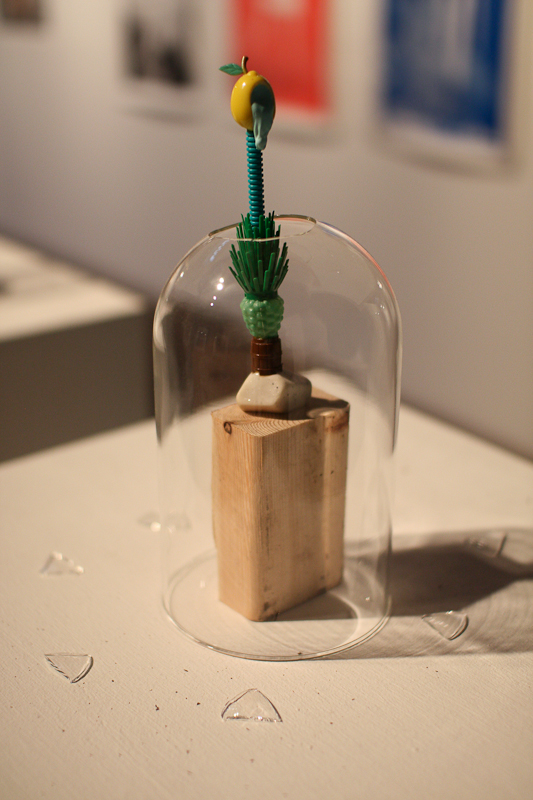 hyperallergic: Do you know what’s going to happen to the space when you’re gone?
mike: Me and some friends may actually try to keep it, but unfortunately this is not a self-sustaining business model. The space is perfect for right now, but there’s no heat, and we basically ran the electricity from a line off the building next door. In order to turn it into something that’s more than a three-month thing, we’d have to invest some serious cash, get the landlord to agree to different terms, all those things. Which, if it happens, awesome. If not, then you know what? It’s been a great time, and we’ll do something else somewhere else some other time.
hyperallergic: That’s sort of the beauty and the sadness of pop-up spaces. 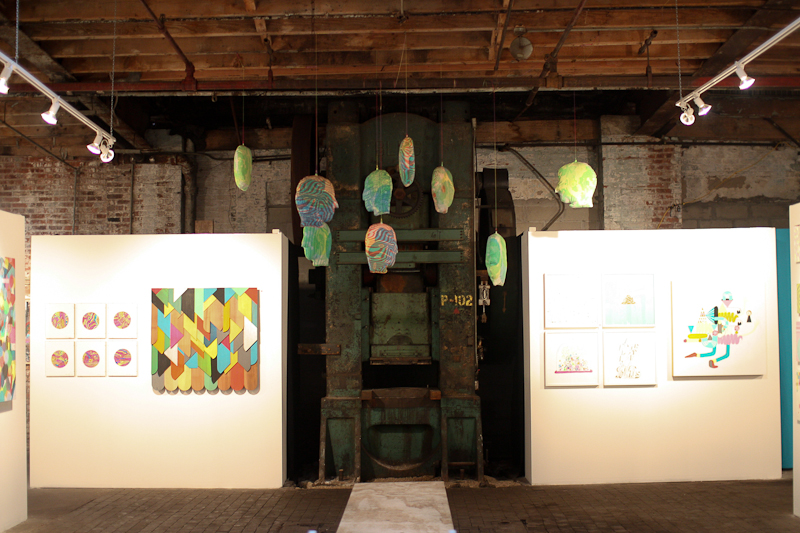 brooklyn spaces: Anything else you wanted to talk about?
mike: No, I don’t think so. I almost teared up a few times during the interview, so I think it was good.