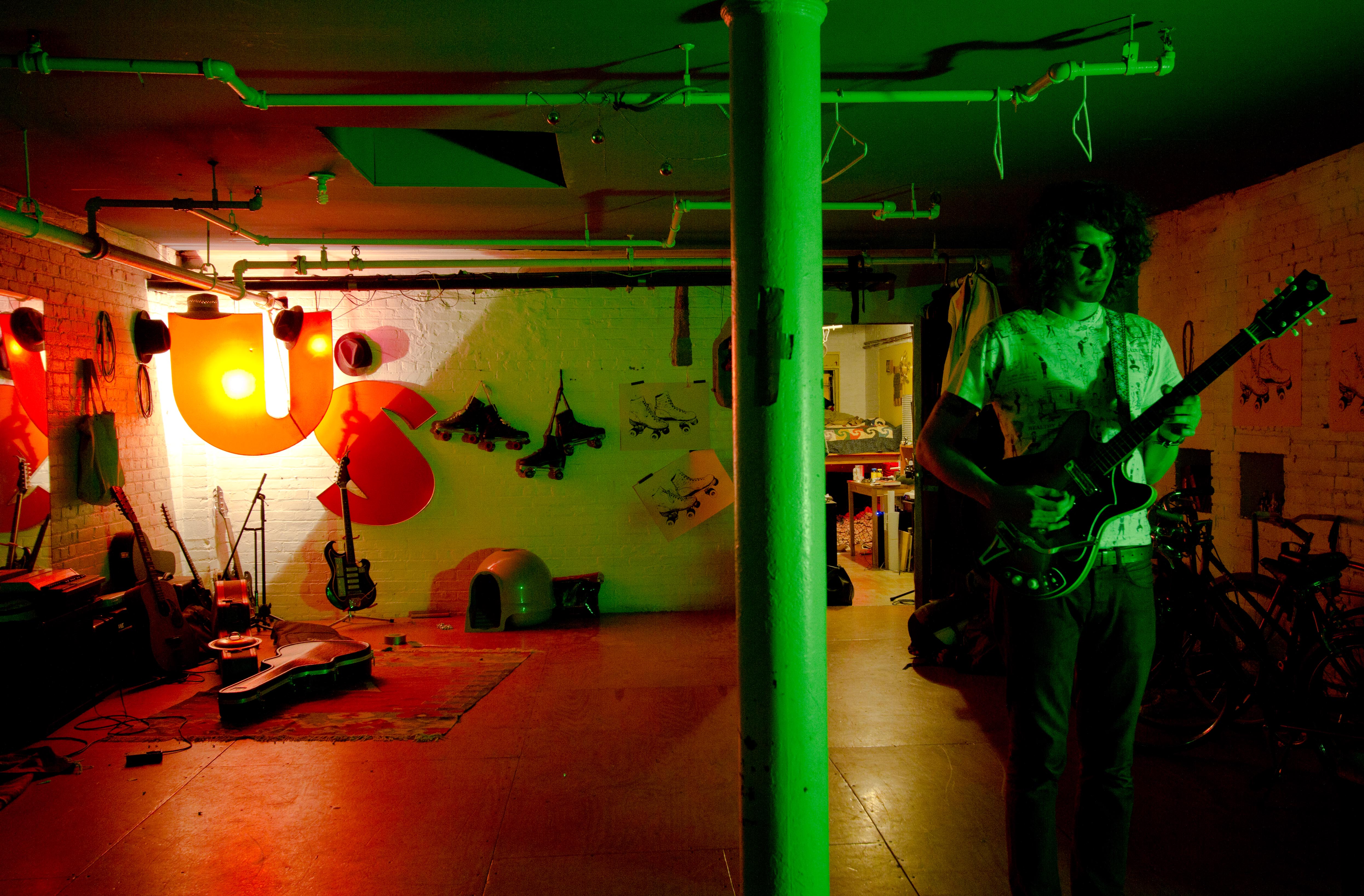 According to The Bushwiki, PS 52 was built in 1883 and served as an arts-intensive elementary school until 1945, when it was sold for use as a manufacturing space. 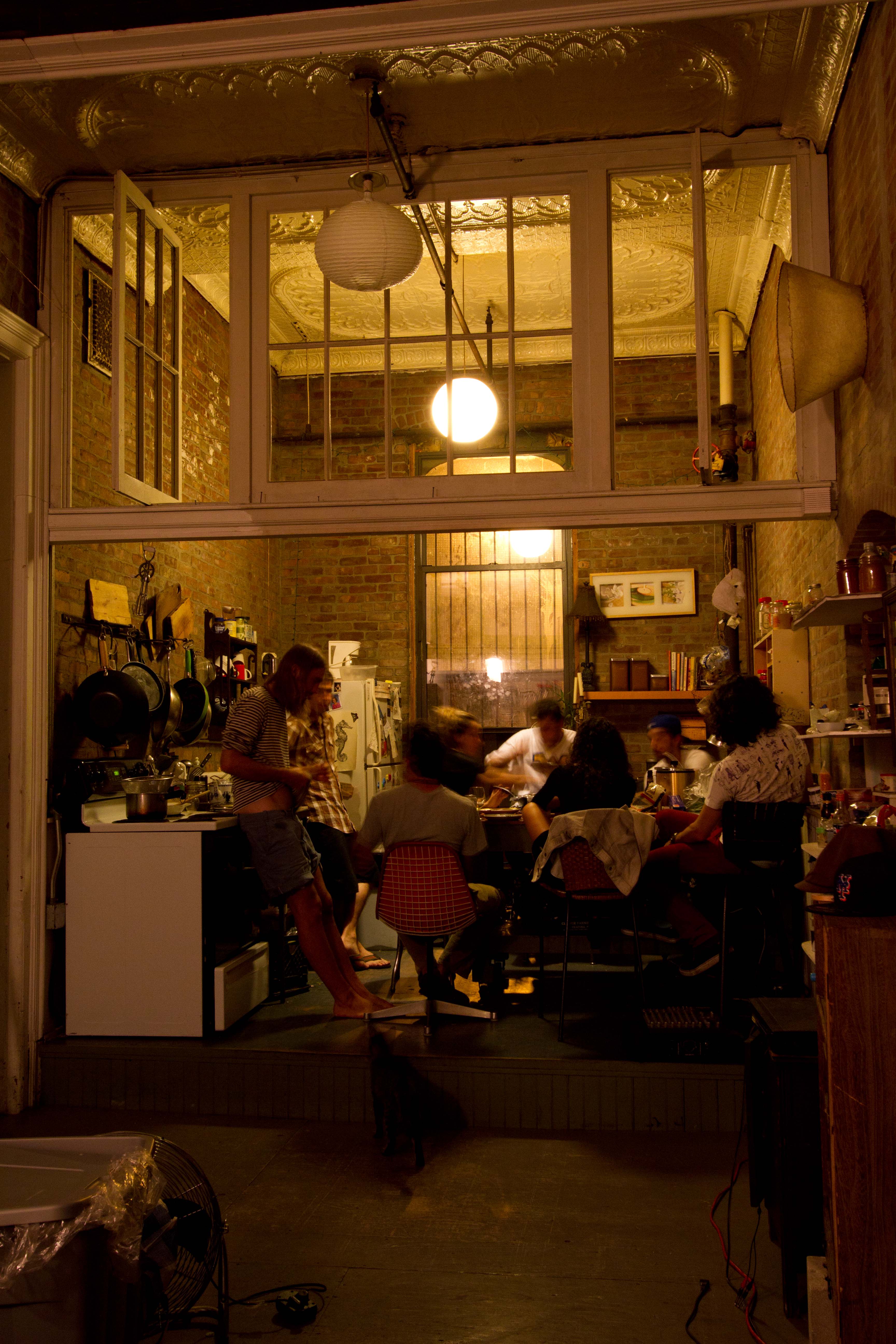 I couldn’t find any information on what happened to it over the next fifty years, but the New York Times steps up to fill in the space’s modern history: in 1996, a twenty-something artist named Erin McGonigle found it listed as a rental in the Village Voice. The building was decrepit and overrun with debris, and Erin and some friends took five months getting it into livable shape. When they started living in the refurbished Schoolhouse they called themselves ORT, an acronym for “organizing resources together.” In 2002 the second floor opened, ushering in the second wave of the collective. 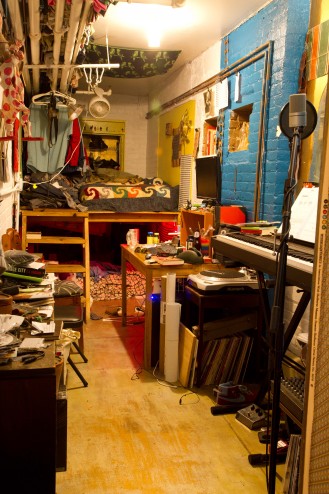 In addition to serving as home for a revolving cast of artists, the Schoolhouse (also sometimes called the Old Schoolhouse or the Old Red Schoolhouse) hosts plenty of events. A small sampling of the musicians who have performed there over the years: Neutral Milk Hotel frontman Jeff Magnum, Verbal Graffiti, Spanish Prisoners, Madame Beak, The Christopher Complex, Zachary Cale, Revival Times, The Asteroid #4, Hollow Jones, and DJ Polarity. Todd P has even put on some shows there. 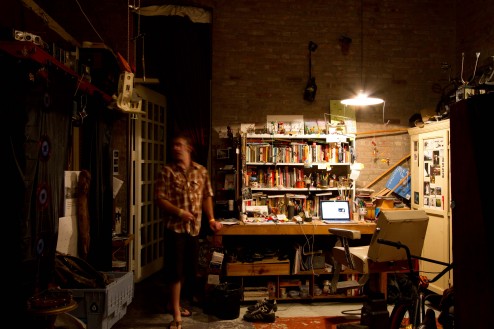 The artists currently living in the Schoolhouse (there are about twenty spread over three floors) consider themselves the third wave of the collective. They run the gamut of creative pursuits, including photography and visual arts, musicians and DJs, fashion design, jewelry making, screenprinting, and even mobile art. One of the benefits of the space is of course how freaking huge it is, and though many of the bedrooms are kind of tiny, the vast common areas make up for it. I sat down with Justin, Chris, Willy, and Dave to talk about their experiences living and making art in this incredible space. 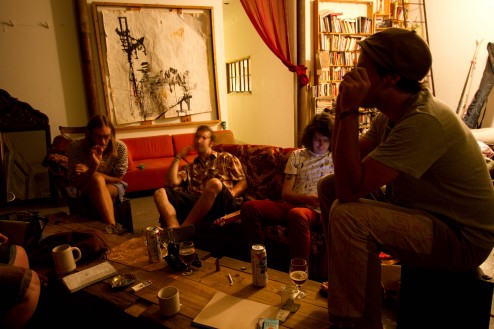 brooklyn spaces: Were you guys drawn to this space specifically, or to Bushwick in general?
Willy: The space. I’d never lived in Bushwick before, I didn’t really know much about it. I’d been to a few different spaces that were built out and thought they were cool, but I’d never seen anything like this before. You walk in here and you just feel the creative energy. And now I get to come home to it. 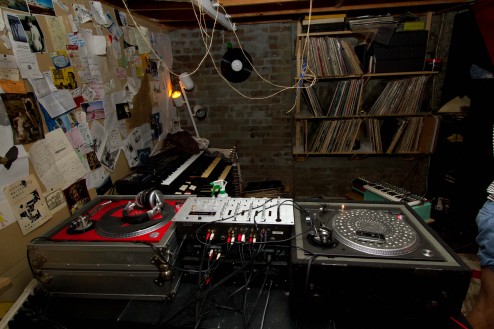 brooklyn spaces: Do you feel like being here has affected the way you do your art, the choices that you make thematically or physically?
Dave: Absolutely. A big thing about this space is having people bounce off each other, and inspiring each other to be greater and to dream bigger. How could you not be affected by other creative people? You’d have to be an alien.
Justin: We all have our more and less productive periods, but for the most part, most of us are always working on something. So you go into Chris’s room and you get inspired by what he’s doing, or you go downstairs and see the screenprinting and get inspired by that. And then the building itself, having artists living here for so long, it has this energy that just resonates. It’s a give and take; the more you put into the place and the more you’re doing, the more it really gets energized. But there’s definitely always something going on that you could tap into. 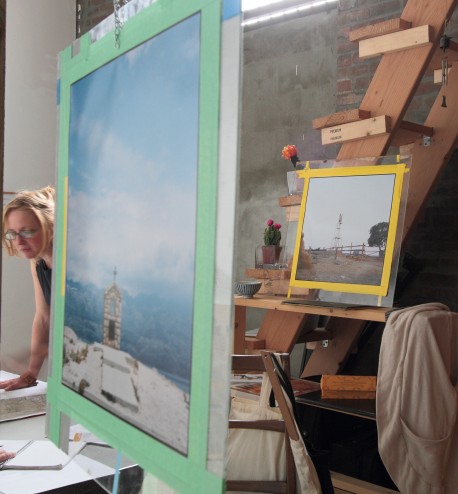 brooklyn spaces: I know in the space’s early years there were some robberies and trouble with community integration. Do you feel like you guys have overcome that?
Dave: Yeah, when we started throwing the block party. Block parties are incredible, every community should do it.
Chris: The block parties are a lot of fun. We do that every summer.
Justin: Everyone in the neighborhood comes out and contributes. This year they roasted a pig.
Willy: There was a giant inflatable water slide. We had the ball-throwing machine where you get dunked.
Dave: We put speakers on the roof, there was a live mariachi band, and then we played old funk records, hip-hop, salsa, Brazilian music, for the block, you know? To show the love and appreciation we have for all art and music. It really makes it safer for the artists who live here.
Willy: Now we know everyone, everyone looks out for each other.
Dave: You have to be a part of the community. You can’t just narrow-mindedly walk past the people who live right next to you. During the block party we open up our home and show people that we’re cool, that we’re in the same struggle. Artists ain’t making a lot of money, you know what I mean? So now everybody sees each other as human beings, and that’s beautiful. 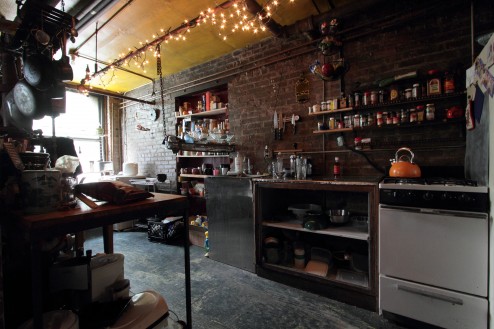 brooklyn spaces: How did you get it started? Did you just go knocking on people’s doors?
Chris: We actually did have to go door-to-door to get the petition.
Dave: Yeah, but it started before that, once we made friends with Sonny. There’s always a hawk on the block who watches, a grandfather spirit, and that’s the person you have to meet and be friends with. It was actually his idea to do the block party. And then we took our strength and went and got the permits to show that we were serious, that we were taking an initiative in the community. 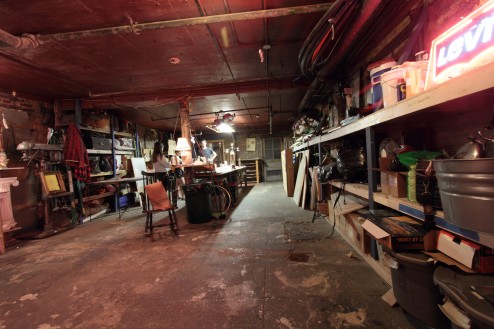 brooklyn spaces: Are you involved with the greater Bushwick art community?
Dave: Yeah. Jason Andrews, who does Norte Maar and Storefront, he stumbled in on one of the music shows here and he scooped me up, and then he showed Justin’s artwork at one of his galleries, so it just all started being interconnected. I performed for the first BOS show at the Collision Machine three or four years ago. I think Arts in Bushwick really started to connect the different spaces, because everybody could come and see everybody’s space and meet each other. We do shows at the McKibben Lofts now, and they come do shows over here. It’s an ongoing artistic explosion. 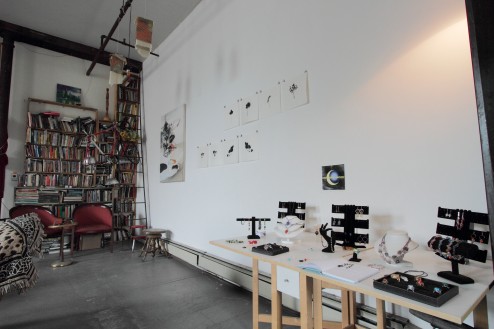 brooklyn spaces: Do you have any thoughts about being an artist in Bushwick these days?
Dave: I don’t think anybody can take credit for what’s happening; I think it’s universal, I think it’s a sign of the times. This area is just part of that shift. Hopefully it’s the beginning of a greater world, a new belief that we want to get together and be creative again, to be dreamers again. There’s nothing wrong with that. Not everybody’s cut out to be on Wall Street, not everybody’s cut out to be a doctor. Some people just like to fucking paint, some people want to beat on a drum. And we should let that live, not stifle it with overpriced rent and over-gentrification.
Chris: As far as art in Bushwick, I think it’s awesome. I think things like Bushwick Open Studios are brilliant. We need to get more recognition out here. Manhattan’s boring, nothing’s really going on in Manhattan. People still sometimes look at Bushwick and think dangerous, like Bed-Stuy, dangerous, and I think it’s just ridiculous. People hear about us and go, “Oh, a bunch of white kids in the ghetto making art.” Not really, we’re hanging out with our neighbors, we’re doing our thing, everybody’s doing their thing, and we’ve got this beautiful space to show for it.