Currently the Cave is being used as a set for an immersive dance performance called “The Cave: Archaic Remnants and the Methods of Transfer.” That name encompasses the space (the Cave), the dancers (Archaic Remnants), and the musicians (Methods of Transfer). The set, sculptures, and installation were designed by Laura Cuille, and nearly a dozen artists contributed music, dance, choreography, and more.

There will be one final performance of this unique site-specific piece on November 21st—buy tickets here. But first read my Q&A with Laura and two other contributors, Don and Arielle. 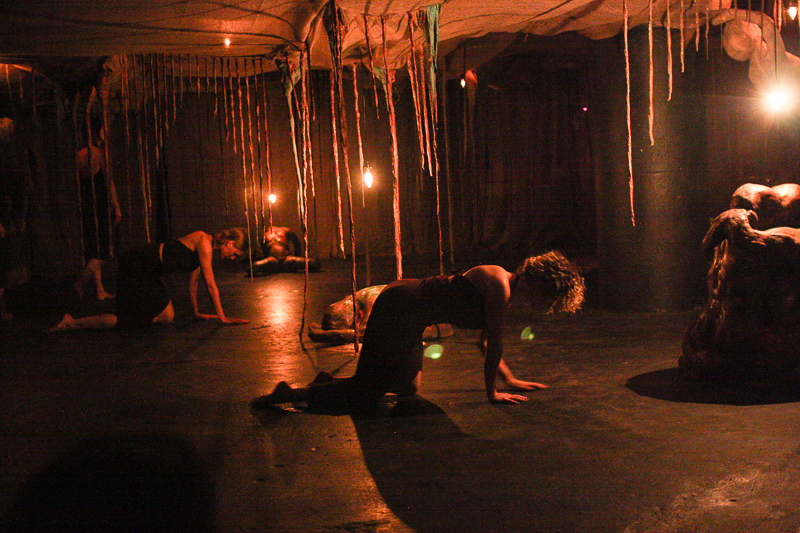 brooklyn spaces: Laura, how did the idea of this performance come about?
Laura: We all came into this space a year ago, and there was already music going on, and visual arts, and movement, but it was really loose and divided. At the time I was making life-size sculptures, and the idea of working with music and dance was in the back of my head. I was actually looking for a different space to install the sculptures, but then I realized I could put them here. So I started building the set and it just clicked that this was something we could all do together and all build off of to make it a whole. 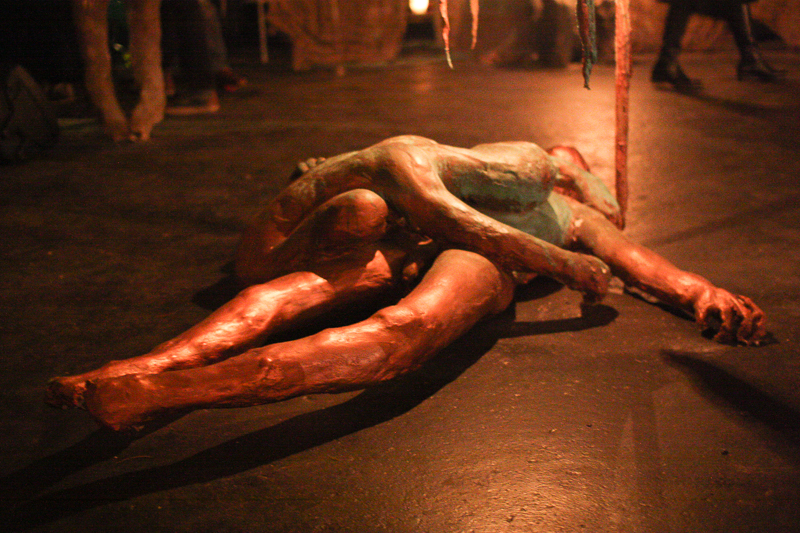 brooklyn spaces: Don, how did the music come together? Were you inspired by the sculptures?
Don: We were collaborating together but separately, if that makes sense. The energy of creation ended up bringing our practices to a solid line instead of two parallel lines. Laura and I are kind of the same, as far as the way we work. I’m the audio version of her. 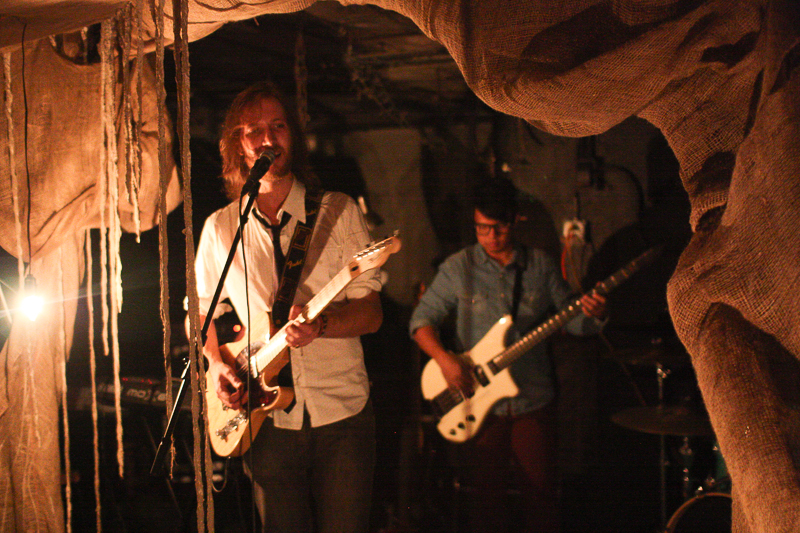 brooklyn spaces: Arielle, what’s your role?
Arielle: I’m behind the scenes, helping. I’m like the host.

brooklyn spaces: How would you describe the show to someone who hasn’t seen it or will never seen it? What are you trying to evoke with the performance?
Don: I would call it a Pompeii cave sculpture with visual stimulation and movements to cinematic music. It’s not that I wouldn’t call it dance, but I think it’s a little different. It’s almost like live shadow puppets feeding off of the music.
Laura: I think the theme is really universal. I was reading Carl Jung’s The Red Book while I was working on this piece—I’ve always been inspired by music and literature to drive me in my art. And I’ve always worked with the human figure because that’s all we can really perceive of. With the Cave it came to me like a spark, because I was just dealing with raw human emotion and psyche and all the things that are at the root of what drive us and have not changed in the history of human existence. All the other shit in society is basically just decoration and different ways to confuse what’s actually driving us, which is really raw and primal. The symbol of the Cave, and then the dance and the music—it explores all these themes, the primal human condition, confusion and pain and all these things, and accepting it more than trying to find a conclusion to it. 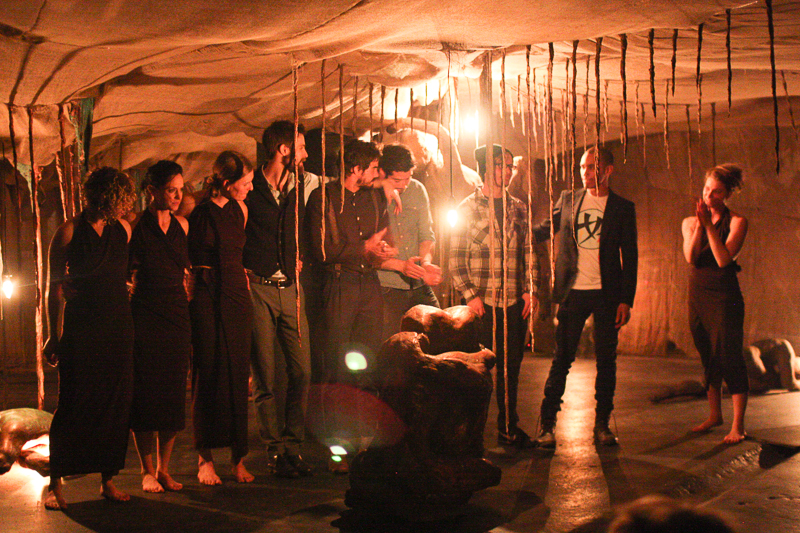 Arielle: Piña Bauche’s dance troupe describes themselves as a “theatrical dance company,” and they use that notion of theatre. There’s something so cinematic about the music in this piece, there’s a sort of theatrical interpretation of movement, symbols that come across with the sound as a sort of shadow and reflection of the dance. And the music, it feels like a movie score. The way it builds and falls is really cinematic. And also, the idea with this piece is that you stay in the Cave, you never leave it. After most performances you leave a space immediately, so whatever experience you’ve had or however it’s affected you, you take it with you, alone. But for this, we’ve brought other artists and musicians to continue performing after the performance, incorporating the vibe or energy from the show. That way, for the audience, whatever feelings you’re having, you don’t have to be isolated with them and you don’t have to just leave. So this isn’t an isolated performance, it’s a performance within a context, within a space, and within what’s to come afterward. 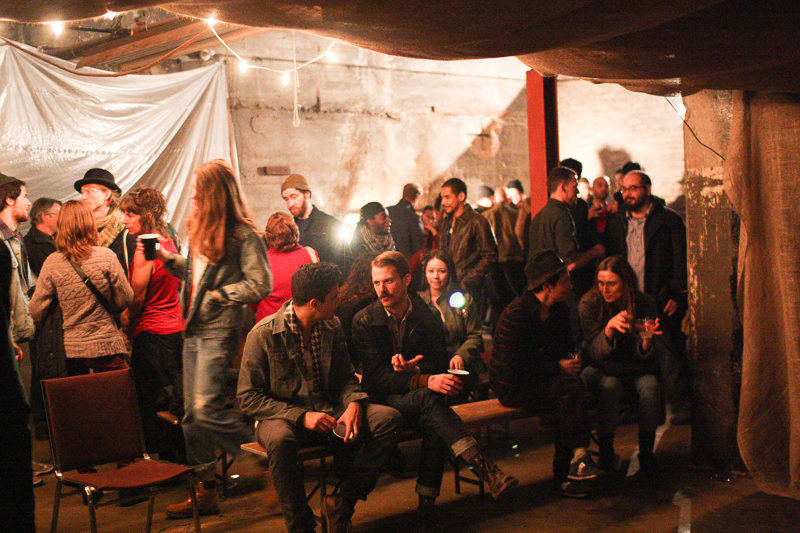 brooklyn spaces: Have any of you ever done a site-specific, multi-faceted performance like this before?
Arielle: No, it was new for everyone involved.
Don: But doing it all this in the space made it really comfortable, almost like playing in my living room. Which is not to say that I didn’t get nervous; I definitely did.
Laura: I agree, the process was so natural. It just moved so easily and so magically. 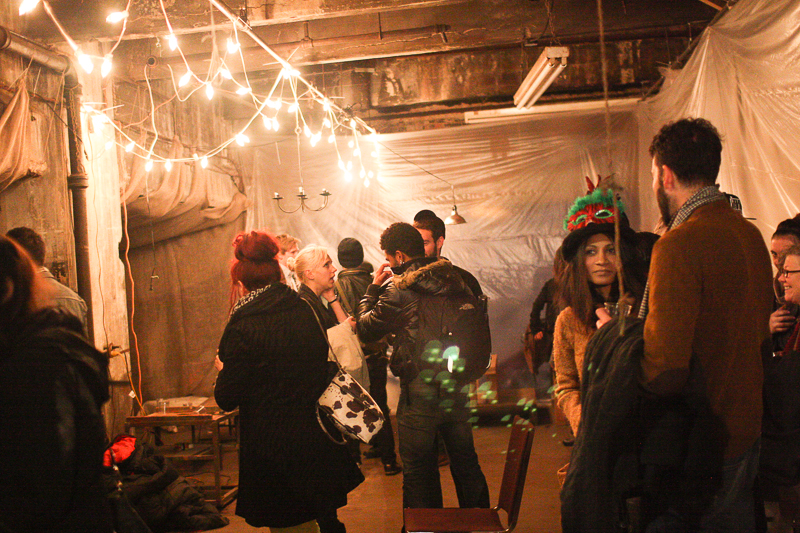 brooklyn spaces: What are your thoughts on being an artist in Crown Heights these days?
Don: I love it here. I think it’s the perfect blend of people. It’s all ages, and it’s not loud; Bushwick, which I do love, is just a lot louder. People are working really hard all over the place there, but Crown Heights is a little more mysterious, there are all these random things happening. There are a bunch of people doing really cool things right in this building. There’s a dude building boats! Tug boats, like pure wood, cedar and stuff. The people around here are so interesting, and there’s so much passion.
Arielle: This neighborhood is a lot more community based, and a lot less commercial. It just seems so natural. 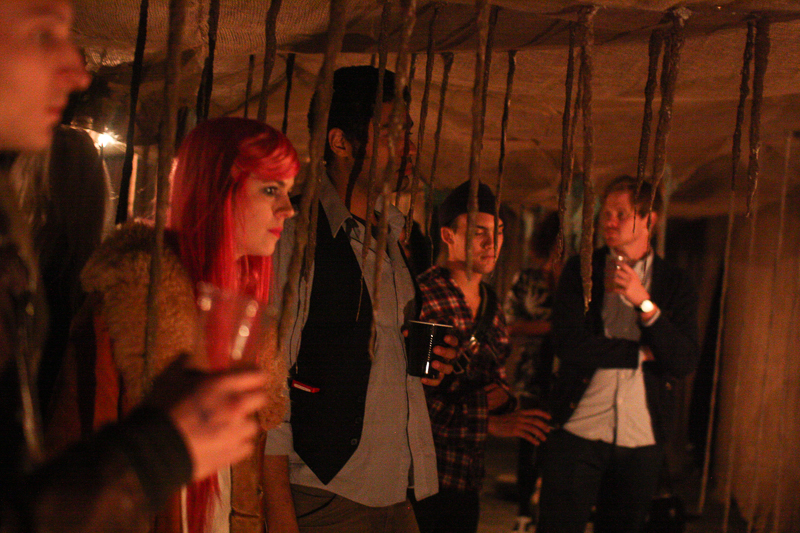