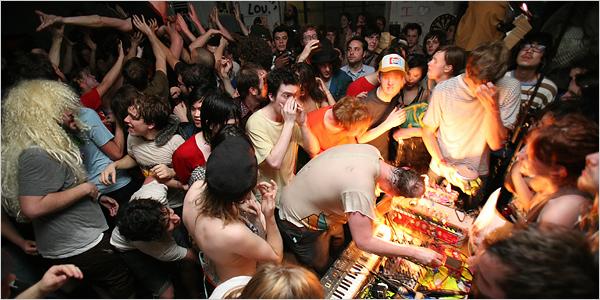 update spring 2013: The Barn is back! Now in Bushwick, and bigger, more diverse, and more ambitious than ever. Read my profile of the new space here.

update October 2011: In July, the Silent Barn was completely ransacked. About $15,000 worth of equipment was stolen, and the space itself was violently sabotaged. But demonstrating the indomitability and resilience of the NYC DIY music scene, the people who run the Barn launched and completed a Kickstarter campaign in September, raising an incredible $40,000 toward a new space.

Silent Barn is an all-ages music venue. It’s also a living space with a rotating cast of roommates, the walls feature dozens of murals by local artists, and there’s an intricate recording system with mics scattered throughout the house. Silent Barn is also home to a zine library with over 700 books, and the DIY videogame arcade Babycastles. It’s one of Todd P‘s many go-to venues.

This one is kind of a cheat, I know, because Ridgewood is of course in Queens. But Silent Barn is barely in Queens, literally across the street from Bushwick, and anyway, it really exemplifies the kind of space I started this blog to cover: relatively unknown, DIY-great, creative and fun and unique. Plus it turns out that one of the bookers (Jordan Michael, who is also the editorial director of the DIY music listings publication Showpaper) is a friend of a friend, and he was happy to let me poke around and take pictures, and he graciously chatted with me while setting up for the night’s show, plugging in mics, digging through buckets full of cables and wires, telling sundry band members where to load in, and arguing with other Silent Barn folks about who’s worse at setting up PAs and which bands have made the latest unreasonable demands. Interview below! 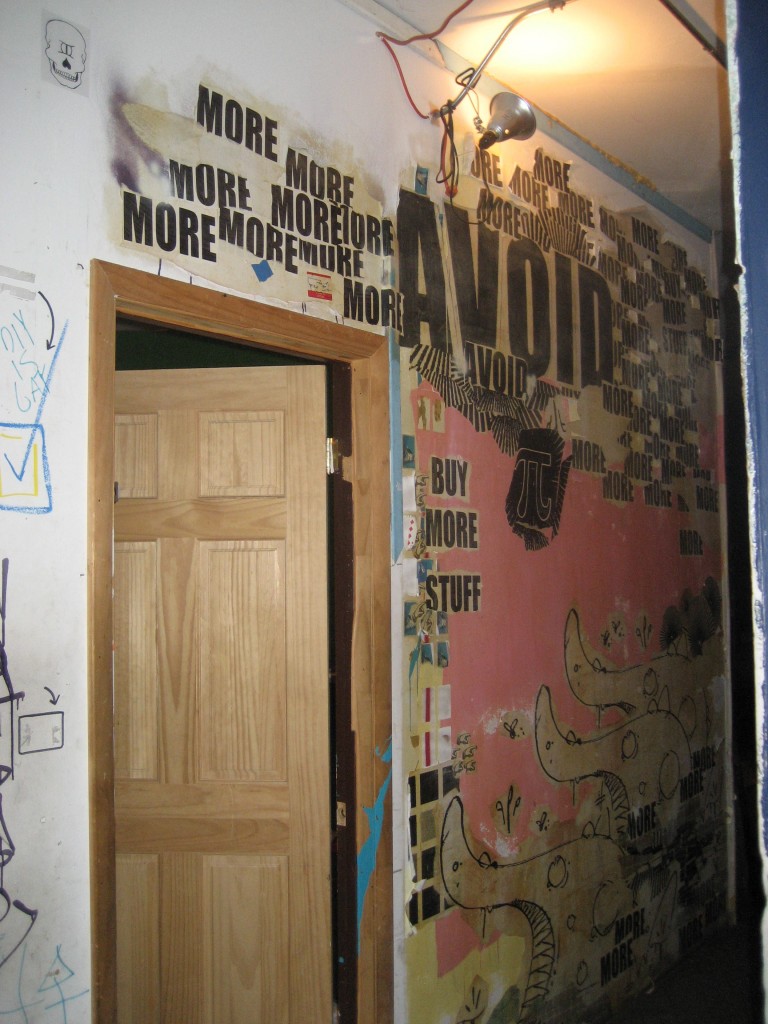 brooklyn spaces: Give me a quick history of the space?
Jordan: It was started six years ago by this band Skeletons. They lived here and used it as a practice space, and they started playing shows and having their friends play shows. Over time there’s been dozens of people who have moved in and out, and lots of people who get involved don’t actually live here, like myself. This isn’t really my project; it doesn’t really belong to anybody, it belongs to the community.

brooklyn spaces: How did you get involved? 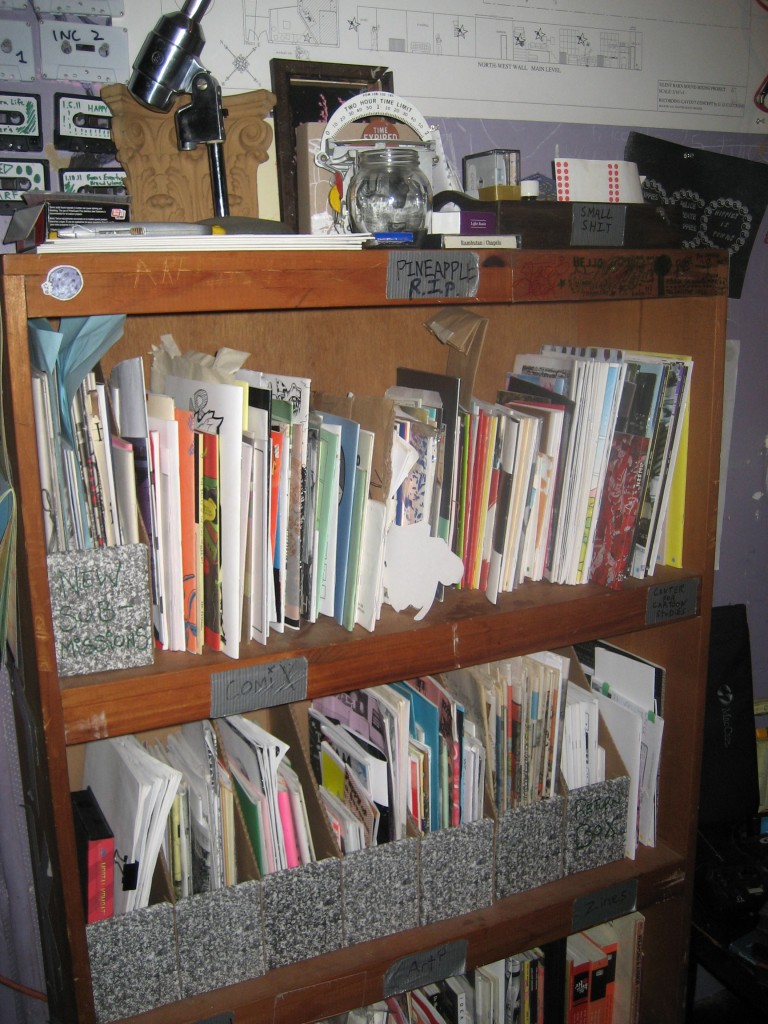 Jordan: Me and Joe, who lives here, work together on Showpaper, which is basically a publication about DIY music spaces like this one. I also work with comics and zines, and I started the zine library here. About a year ago I curated some workshops with the Center for Cartoon Studies in Vermont, they came here and did some workshops on making indie comics. Then I did a benefit show for the zine library where if people donated a zine they could get in for free, and that went really well, and I just realized I liked and was good at organizing bands. Organizing bands in a space like this is kind of like marbles. You know the game marbles, where there’s a circle that’s like a wall, and the marbles all just roll away on their own momentum out of the wall? It’s kind of like that.

brooklyn spaces: Is it always the same kind of music?
Jordan: No. Tonight’s show is indie-rock-punkish music, and the show I have Saturday night is all chiptune, and the last show I did was a mixture of hardcore punk and local hiphop, and the show before that was folk. So I’d say it’s just all good music. I don’t know, everybody’s called me a music snob my whole life, but now I’m a curator. 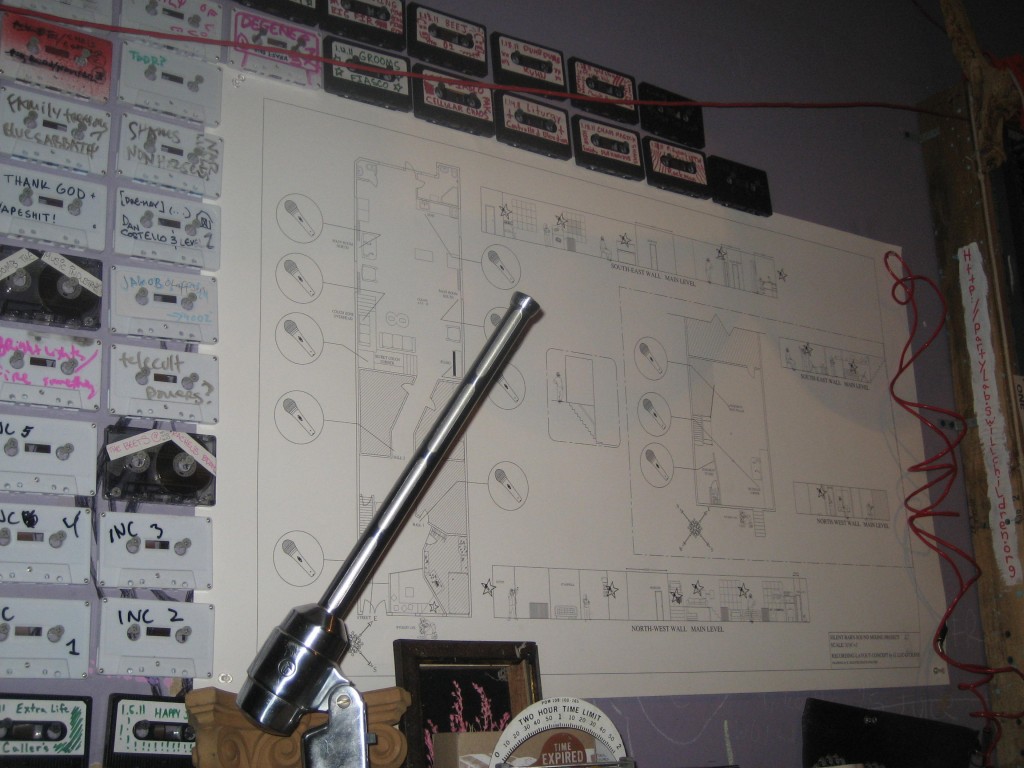 brooklyn spaces: You mentioned that there’s a system where all of the rooms are recorded, not just the show space. What’s that about?
Jordan: That’s Lucas’s project. He’s a cassette artist, and he’s in the band Woods. It’s a recording of the entire space at the same time, not just a recording of the bands that play. So on a Friday, you hear the Dominican restaurant next door playing bachata music and people screaming at each other.

brooklyn spaces: And it’s used for what? Just to have?
Jordan: To record. To survey.

brooklyn spaces: Since this is a blog about Brooklyn, do you have any opinion about whether a space like this could have happened somewhere other than Brooklyn?
Jordan: Yeah, it could have happened in Ridgewood! I mean, there’s tons of spaces like this, all over. One of my favorite things about doing this is getting to meet all the people that are participating in places like this from all over the world. They all have their different things, but they’re all similar. There’s a place in Bushwick called Shea Stadium, their sound booth is an actual recording booth, on their website they have professional recordings of all their live shows. There’s a place called the Rhinoceropolis in Denver that’s a lot like this, there’s The Smell in LA, there’s Whitehaus in Boston; in every city there’s a place like this. It’s normally run by people who are in bands and can’t get anybody to book them, so they just have their friends come over and play for them, and then their friends want to play, and then people who came to their friends’ show want to play, and it just becomes a thing. It can totally happen somewhere other than Brooklyn. Actually, I’d say one of my major pet peeves is when people talk about Brooklyn like it’s this wonderful Oz place, the only place where things like this can happen. There are tons of cities, like Athens, that have a much more historical independent music scene than New York. I don’t really think New York’s all that special, to be honest. I’m way more impressed by Philadelphia or Baltimore. All the people in Baltimore are doing cool shit all the time, and they’re in a lot more danger than we are here. This isn’t a great neighborhood; it’s not a bad neighborhood, but it’s not great. But Baltimore is horrible.

brooklyn spaces: Anything else you want to tell the world?
Jordan: Yeah, don’t hang out outside the doors. We’re not BYOB, don’t bring in your own beers. And don’t be a dick about it when I try to take your beers away from you; it’s my friend’s house, I can take away your beer. And I want to stress that we really don’t let kids drink here. And don’t smoke upstairs, people live here. Smoke downstairs! We let you smoke inside, just go downstairs, stop being a dick about it. 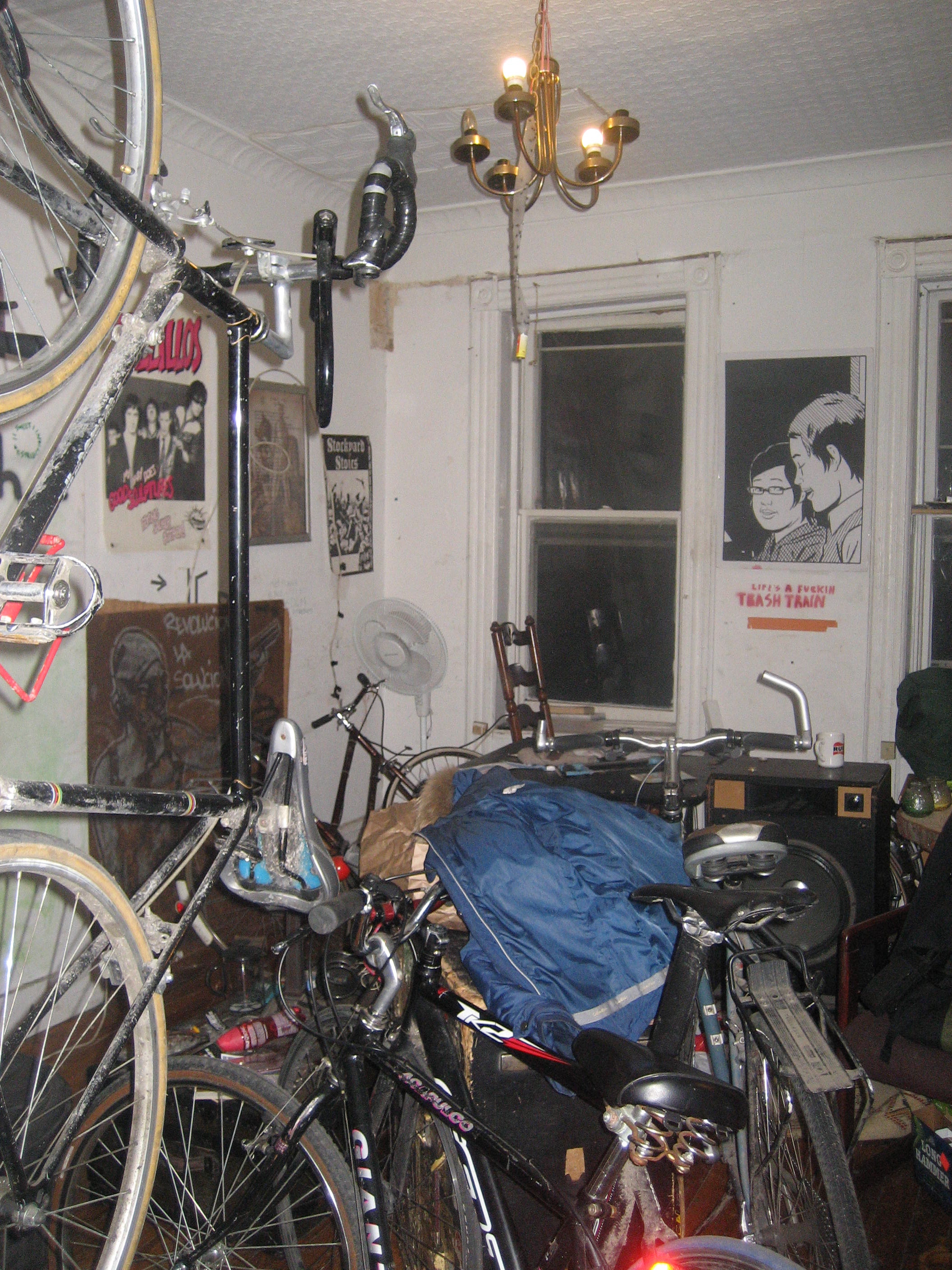 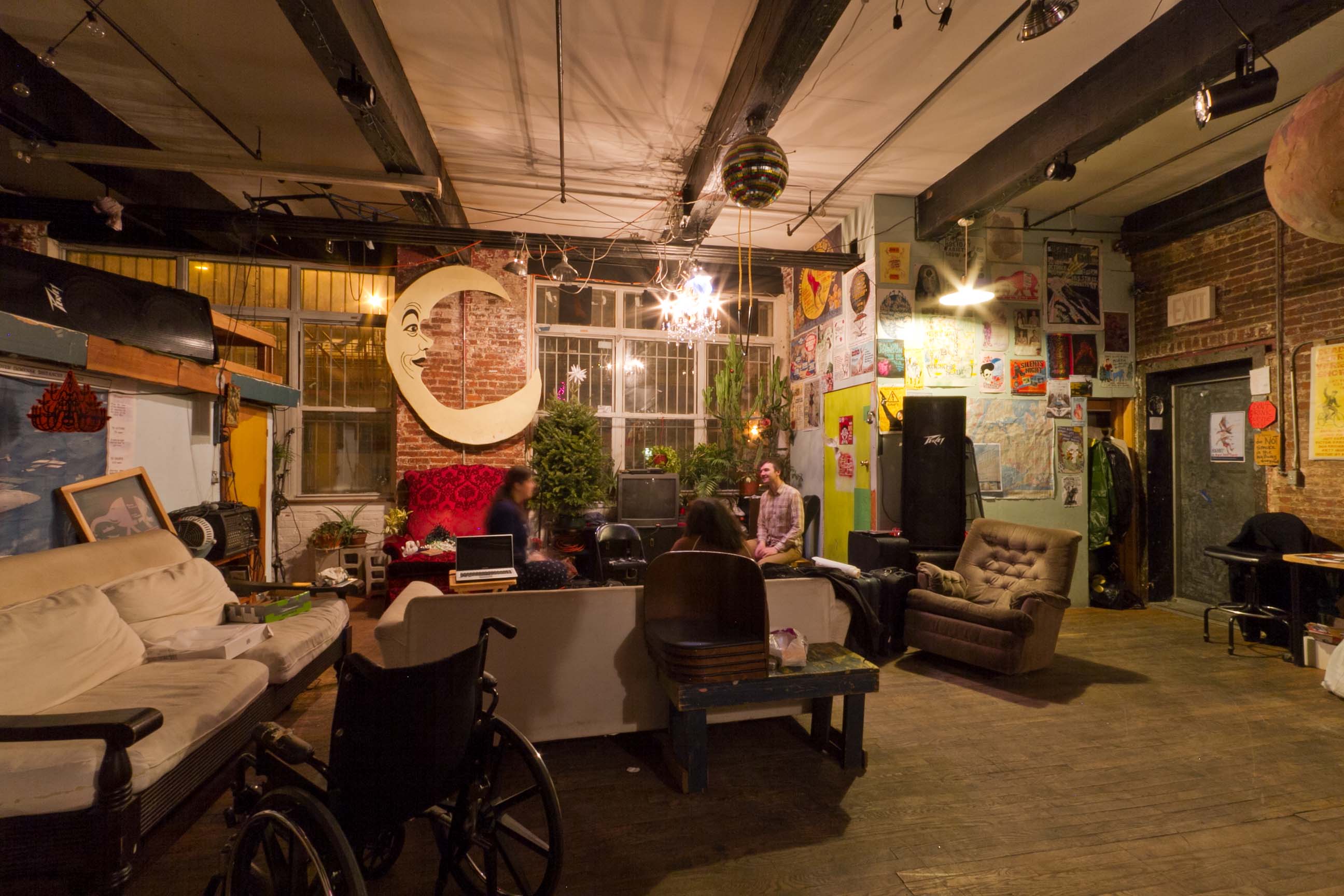 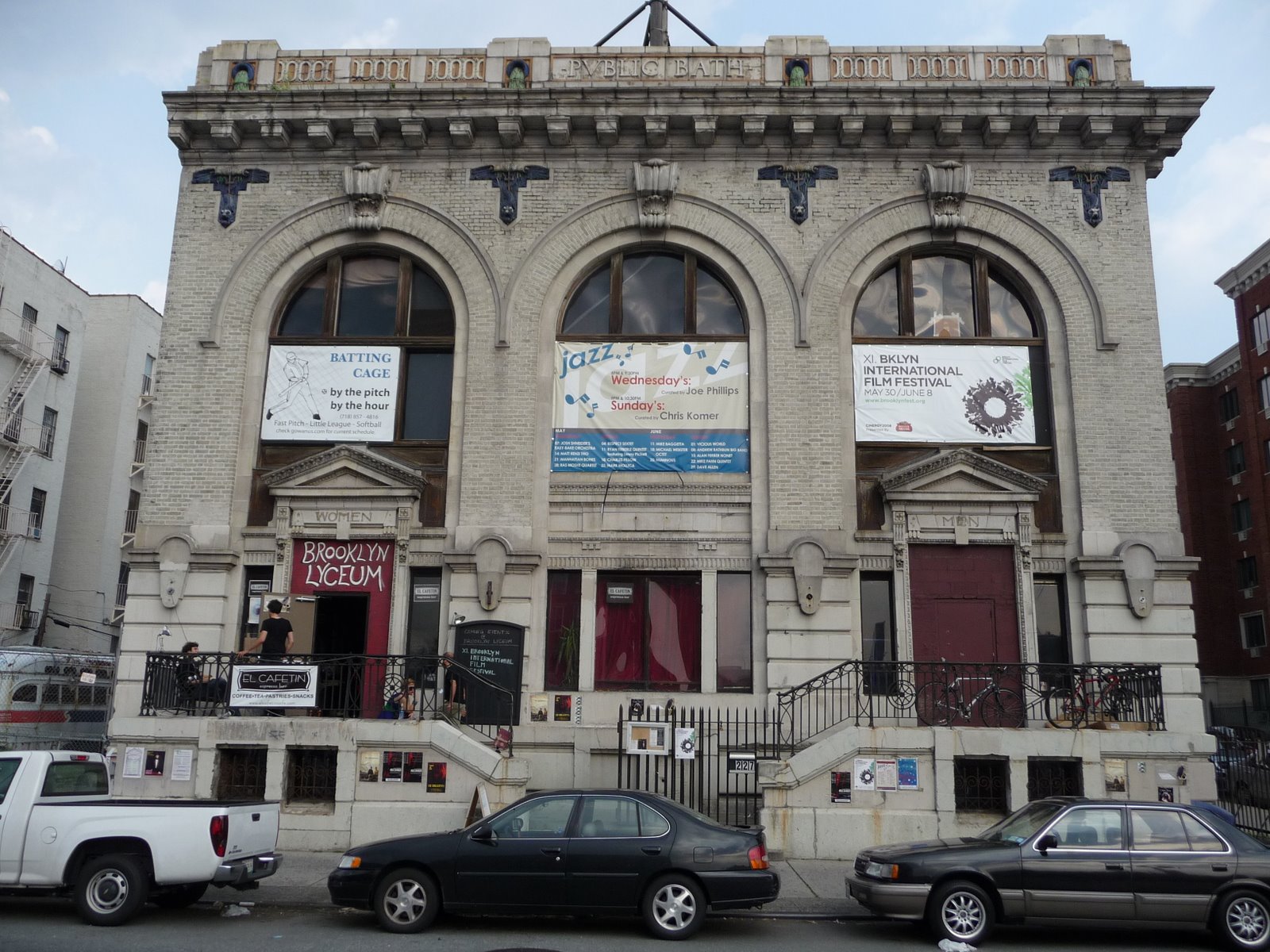