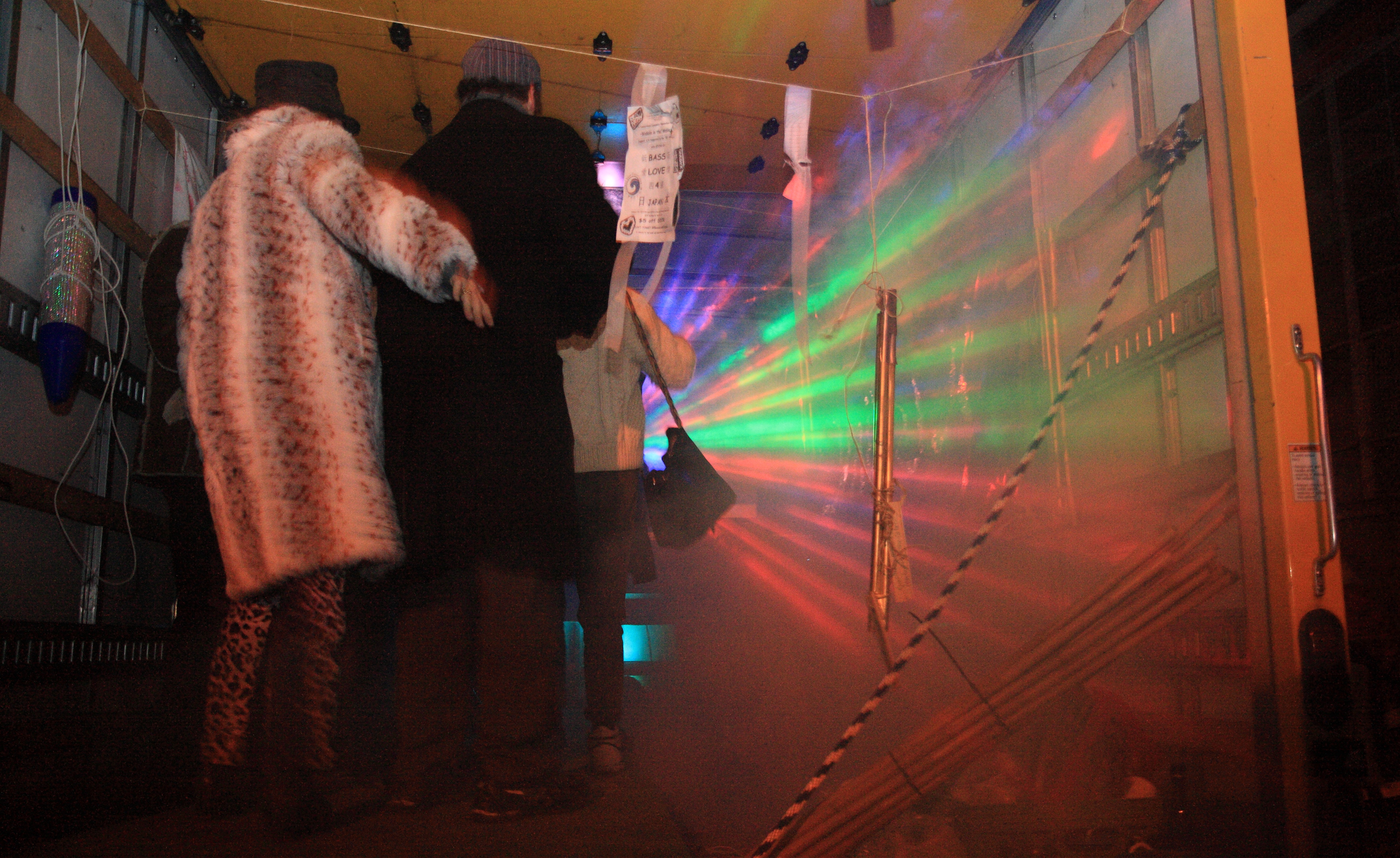 Okay, the Lost Horizon Night Market isn’t exactly a space, it’s more an idea contained in many, many spaces. But it’s such a spectacularly fun idea—and several of the awesomest nights I’ve had in my ten years living in New York—I couldn’t possibly not cover it.

The Night Market is a crazy guerilla art event, masterminded by Mark Krawczuk and Kevin Balktick (interview with Kevin below!). Every few months, dozens of people rent box trucks, make them over into interactive art installations, park them on an empty block in a desolate corner of Brooklyn, then roll up the doors and invite people in to play. The whole event only lasts about four hours, and then the trucks drive away and it’s like nothing ever happened. Melissa, who did the Campfire Truck with her art collective, Blood Dumpster, said, “The whole concept reminds me of gypsy caravans or traveling circuses in the way that they would roam from town to town, set up shop for the day, and then be gone by morning.”

At the Night Market in March 2011, some of the trucks I played in were: The Teapot Dome Disaster, where we all sat around a long table and were served green tea; Granny’s Attic, dense with clothes and dishes and books and detritus, all for the taking (I got a plate and a scarf!); Bass Tsunami Truck, where I walked along suspended planks and my whole body vibrated with the pumping bass; Space Truck, filled with fog, where moonmen urged us to “drink of the body of space” while proffering a goblet of punch; the Petting Zoo and BBQ Truck, in which, after cozying up to some very lifelike papier-mâché cows and pigs, we were served delicious cubes of barbecued pork; and the Smash Truck, where lucky participants went behind plexiglass and donned goggles to smash up old electronics with a hammer. Some trucks I missed: the Hot Tub Truck (yes, for swimming in), the Strip Truck (yup, with actual strippers), the Boxing Truck (with a ring and costumes for the competitors), and so much more.

According to Melissa, “making a truck pushed me to think outside my normal boundaries. This was trying to immerse not just one person, like most art, but a large group of people into a different setting, and to play on the expectations of what they would find in the back of a truck.” The possibilities really are endless.

Noah, who did the Big Quiz Thing, a spinoff of his company of the same name, said, “This is the kind of thing we live in NYC for. I’m always amazed how much effort people put into things like this, expecting no financial reward. It renews your faith in the human race, and in the positive power of art.” I couldn’t agree more!

brooklyn spaces: What was the genesis of such a crazy project?
Kevin: Mark saw this pickup truck with a pagoda thing on top at Burning Man, and he thought they were serving sushi. It turned out that they weren’t, but he thought it was great and wanted to do something like it. There’s an event called Decompression that the New York Burning Man community puts on here, and he decided to do it there. I was working that night, and I was on the radio, and someone announced, “By the way, I would strongly suggest that everyone check out the secret Japanese noodle restaurant running out of a truck in the parking lot.” And, lo and behold, there was a fully functioning ten-seat restaurant serving freshly made noodles, running out of this rental truck. Mark did that a few more times, once in front of Rubulad, once in Dumbo, bringing the truck to different parties. And then we started thinking, “Let’s do an event where everything is in trucks!” The first official symposium for the Night Market was held in a truck parked behind a building in Dumbo, and the first Night Market was three or four blocks from there, during the Dumbo Arts Under the Bridge weekend about a year and a half ago. We had about ten trucks, and it was the only Night Market that will ever happen where every person got to see every truck. This past one is the fifth we’ve had in New York. San Francisco has had two. There are other cities that are interested in picking it up, too. It’s turned into a really nice project. And it started with Mark and the noodle truck at Decompression.

brooklyn spaces: I tried to get into the noodle truck, but the line was too long.
Kevin: Yeah, it gets pretty brutal.
brooklyn spaces: But they did a good job, they had someone standing outside giving haiku assignments to keep the masses entertained.
Kevin: That’s something we just learned. One of the San Francisco Markets had an Alice in Wonderland truck, and there was a guy at the back of the lift-gate telling riddles, and whoever answered the riddle got to go in, whether they’d showed up an hour ago or five seconds ago. That was the dawn of the line-based entertainment. I’ve got to do something for my truck next time, because I always have a line, and people are always standing there looking unhappy.
brooklyn spaces: Because especially as it gets later, you start to panic, since there’s so much left that you haven’t seen yet.
Kevin: Well there’s no way to see all of the trucks at this point. In theory if you spent exactly six minutes in each truck or whatever you could do it, but that’s kind of pointless.

brooklyn spaces: How did you publicize it at the beginning?
Kevin: We didn’t. And the reason for that is because it’s an event with a very finite capacity. We’ve always said that the rule of thumb is: “Don’t invite anyone you wouldn’t invite to a party in your home.”

brooklyn spaces: As the originator of the event, how much authority do you bring to it? How much do you have to do?
Kevin: Technically speaking, we have no authority. These are all things that happen in public places, so from a certain perspective, we can’t tell anyone what to do. The planning really consists of getting our friends together and encouraging people to do trucks, helping them conceptualize and things like that, setting up the meetings and symposia, and then Mark and I drive around a lot and look for places that we feel would work right. It’s actually a sort of very reasonable amount of planning, because everyone is totally self-contained. It’s just not a ton of work for something that creates a lot of joy for a lot of people. Everyone involved does a little bit of work, but no one has to give their life up to make sure one of these things happens.

brooklyn spaces: What have been some of your favorite trucks?
Kevin: I’ve actually seen fewer trucks than most patrons, since I’m often presiding over my own. But some of the most memorable for me have been the Surveillance Truck, the Sleep EZ Motor Inn, the Hot Tub Truck, the Strip Truck, Make It Happen, the Smash Truck, and, of course, the Lost Horizon Noodle Bar.

brooklyn spaces: What are some you’d still like to do or see?
Kevin: There are so many ideas out there. My favorite clever idea that no one has done yet is the Needle in a Haystack.

brooklyn spaces: Any final thoughts?
Kevin: The Night Market gives people a platform to realize projects without having to worry about renting a venue or promoting themselves. It’s a forum for DIY creativity and entertainment. We believe that it’s a nicer world when everyone can create with and learn from one another instead of relying on the world of commerce to tell you what to do and who to meet. We didn’t invent and certainly don’t own the idea of truck-based entertainment. Anyone can do this; you don’t have to wait for us to tell you when the next one is going to be. Rent a truck. Do something neat. Invite your friends. Have fun. 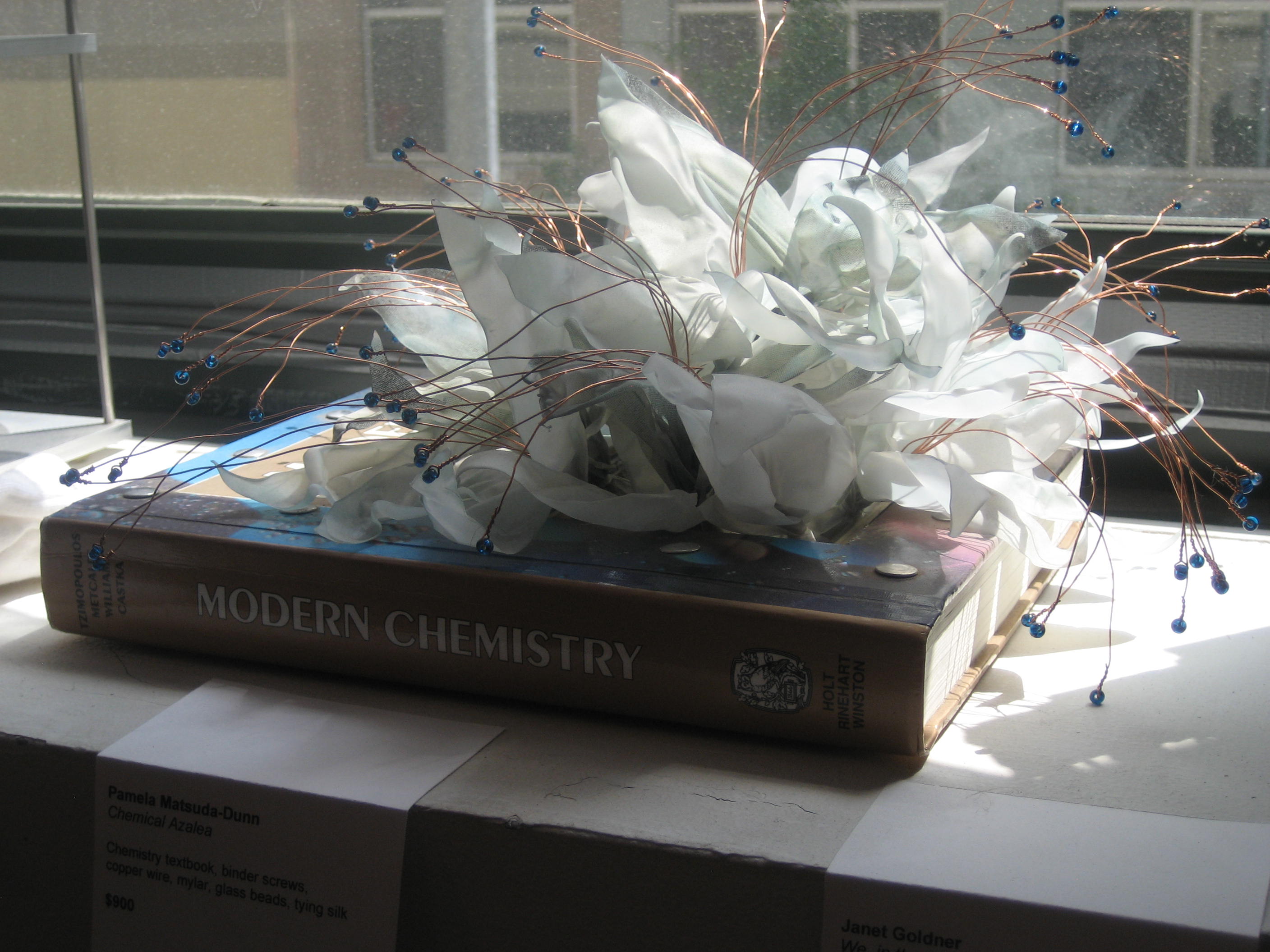