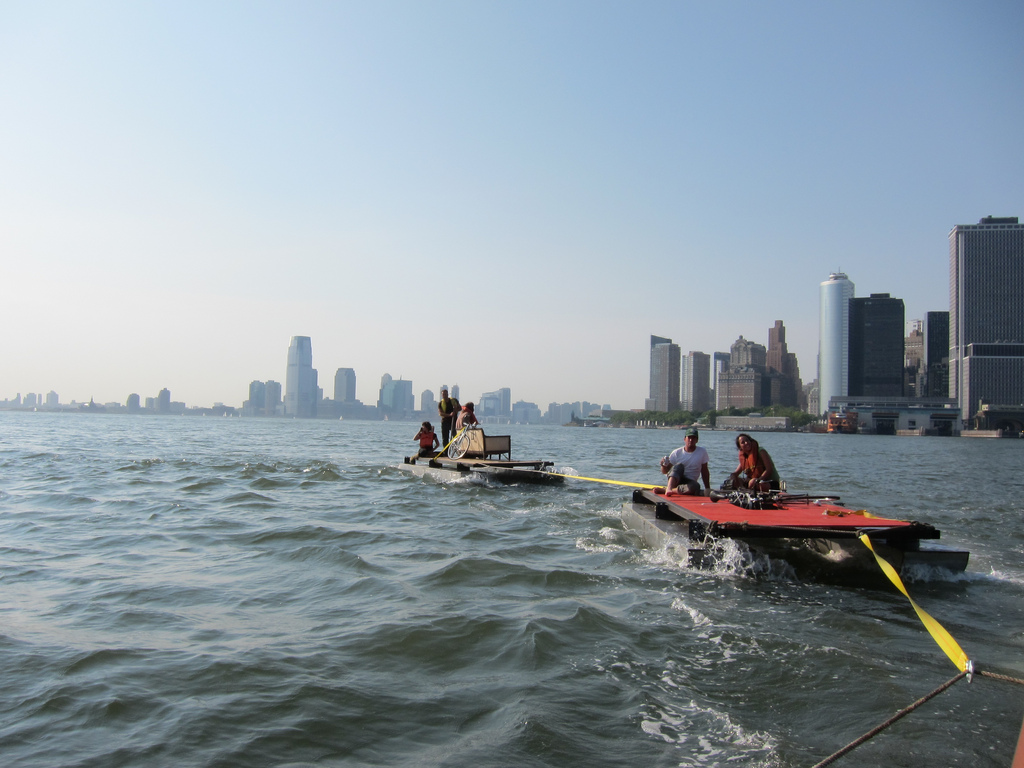 update, Nov 2011: Want to see some absolutely amazing photos from Swimming Cities’ incredible trip down the Ganges in India? Check ’em out on their blog here.

With this post, I am thrilled to say that I’ve covered all the spaces that inspired me to start this project! Not that I intend to stop; I’m just really excited to have finally gotten to talk to everyone I’d initially set out to, and to celebrate all their crazy brilliance.

So let’s talk about the crazy brilliance of Swimming Cities. They’re a nebulous art collective of somewhere between ten and thirty people who build boats out of found materials and sail them all over the world. The boats themselves are essentially floating works of art, and the group does visual, musical, and dramatic performances atop them as they go. The first project, started by Orien and Callie (also known as Swoon), was the Miss Rockaway Armada (since splintered into its own collective), which went down the Mississippi from Minneapolis to New Orleans in 2001. The next project, Swimming Cities of the Switchback Sea, went down the Hudson River, from Troy to Deitch Projects in Long Island City, in 2008. Then in 2009, Swimming Cities of Serenissima sailed down the Adriatic Sea, starting in Slovenia and winding up in Venice to crash the Biennale. And now, in September 2011, Swimming Cities Ocean of Blood is making their way down the Ganges in India, starting in Farrukhabad and ending in Varanasi for the Diwali festival.

They’re a well-connected group in the Brooklyn underground & art communities. Over Swimming Cities’ history, all manner of artists and collectives have taken part, including members of the Madagascar Institute, the Toyshop Collective, the Infernal Noise Brigade, GreenBusTour, Black Label Bike Club, Flux Factory, and dozens more. Much of the initial work on the Ocean of Blood boats was done at Serett Metalworks, and they throw crazy themed fundraising parties at the Gowanus Ballroom, Electric Warehouse, Chicken Hut, the warehouse on Ten Eyck, 285 Kent, and lots of others. The collective is also naturally involved in the Burning Man community and participates in Maker Faire, often winning awards for their ingenious floating creations. You can donate to their Kickstarter campaign to help them get home from India, but first check out my interview with Orien (third from left) and crewmember Angie (far right).

brooklyn spaces: How did this all get started?

Orien: I had a boat and was living on the Gowanus Canal, and Callie lived a few blocks away. We met at Pratt, and she would hang out on my boat and we’d talk about building a floating performance art space. Then I left and spent some time in India, and she did Miss Rockaway Armada with several other artists. After that we did the Hudson River and Venice projects together, and then Callie was giving the project up, so I asked her if I could keep it going. India was the obvious choice for me; it’s my favorite place. But there was a lot of ambiguity about whether this would actually happen. I’m not a famous artist, I don’t have any money, I don’t have backing. But it gradually gained momentum, and now Swimming Cities has a presence beyond its association with Swoon and the other projects.

brooklyn spaces: Before we get too much into India, what was it like being in Venice for the Biennale? How was the reception?
Orien: Being in Venice with a boat is so much fun. I don’t recommend going there if you can’t get a boat, it’s just going to drive you crazy. And the reception was great, everybody loved it. Except when we went into the Arsenale, which is a military base, like a fortified marina, this big square with water and some sort of promenade around it. We went in there with Dark Dark Dark playing on the roof we and tied up the boats, and they came and cut our lines and told us to fuck off. But come on, we basically came uninvited in junk boats, so of course they did that.

brooklyn spaces: Okay, so now tell me about India. How many of you are going over, how many boats do you have, how did you set it all up?
Angie: There’s five boats, eight people are going, and we have a couple of Indian people there. We sent a scout a few of months ago, and he lined up places for us to stay and to store stuff, and people to help us, and institutions and permits and things like that.
Orien: They government wanted to know what we were doing. They don’t want to be like, “Oh, you’re doing a performance? Great!” and then you get there and quarter a cow or do something really offensive. But we got a letter of support from the Ministry of Culture that says something like, “Your project is not specifically offensive to us from a cultural perspective.”

brooklyn spaces: The highest praise. What are the performances going to be?
Orien: We’ll be pretty far out on the water, so it’s not practical or logistically possible to have sound or a plot. It’s going to be a gradual, five-day visual performance with a very vague narrative. It’s kind of like architectural puppetry.
Angie: We’ll have a big mechanical sculpture involving lights and movement, and at the end the boats come apart.
Orien: It sort of demonstrates the function of what makes the object interesting.

brooklyn spaces: What do you guys do in between trips?
Angie: We have a lot of events. Most of them are fundraisers, but this summer we did the Battle for Mau Mau Island in Gerritsen Beach, where we got all our friends to form boat gangs. There was a race, a battle, and boat jousting.

brooklyn spaces: What’s your motivation for doing this?
Orien: I’m really interested in boats as pieces of architecture, as objects. I come from an industrial design background, that’s what I went to school for. And all these people really enjoy being a family and having a common goal that isn’t about money or the banality of the homogenized world of bullshit. So I just keep doing it. It’s a reaction to the alternative. To exist in the actual world isn’t really an option for me; if I don’t do this, what the fuck am I going to do?

brooklyn spaces: What’s next for you guys?
Orien: We’re probably going to go to Russia, down the Volga river to Moscow. I really want to go to Lake Baikal, which is one of the world’s largest lakes, it represents one-sixth of the world’s fresh water. It’s got seals and underwater caves, it’s insanely deep, and it’s in the middle of Siberia, there’s nothing near it. And surrounding Moscow is the Golden Ring area, the oldest part of Russia, so you have this really old architecture and culture.

brooklyn spaces: Are you inspired as an artist by being in Gowanus, or in Brooklyn in general?
Angie: We were totally lucky to have Josh get that shop on the Gowanus.
Orien: Oh yeah. We built the first boat in this tiny place on Nostrand Avenue, and then Josh was like, “Guess what? I’m getting a new shop and it’s insanely massive and it’s on the Gowanus Canal.” It was just the most ridiculous luck we’ve ever had. This project wouldn’t have happened without Josh and Serett, it literally would not have. But other than that, I don’t find New York especially inspiring. It’s basically an impossible place to get anything done.

brooklyn spaces: But overall, has this been a rewarding experience?
Orien: Definitely. I have all the things I was looking for. We have the best friends anyone could have. We have something to do that isn’t awful, that doesn’t contribute to the greater horror, that doesn’t hurt people. No one has gained anything from what we’re doing, except maybe the beer distributors. Other than that, no one’s getting rich off us, which is nice. That’s about all you can ask for.

Like this? Read about more art collectives: Monster Island, Hive NYC, The Schoolhouse, Bushwick Project for the Arts, Flux Factory 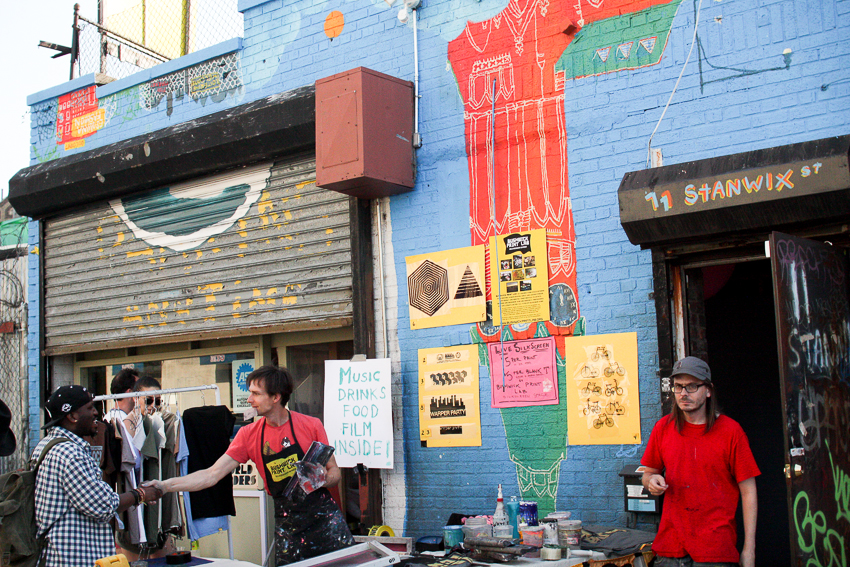 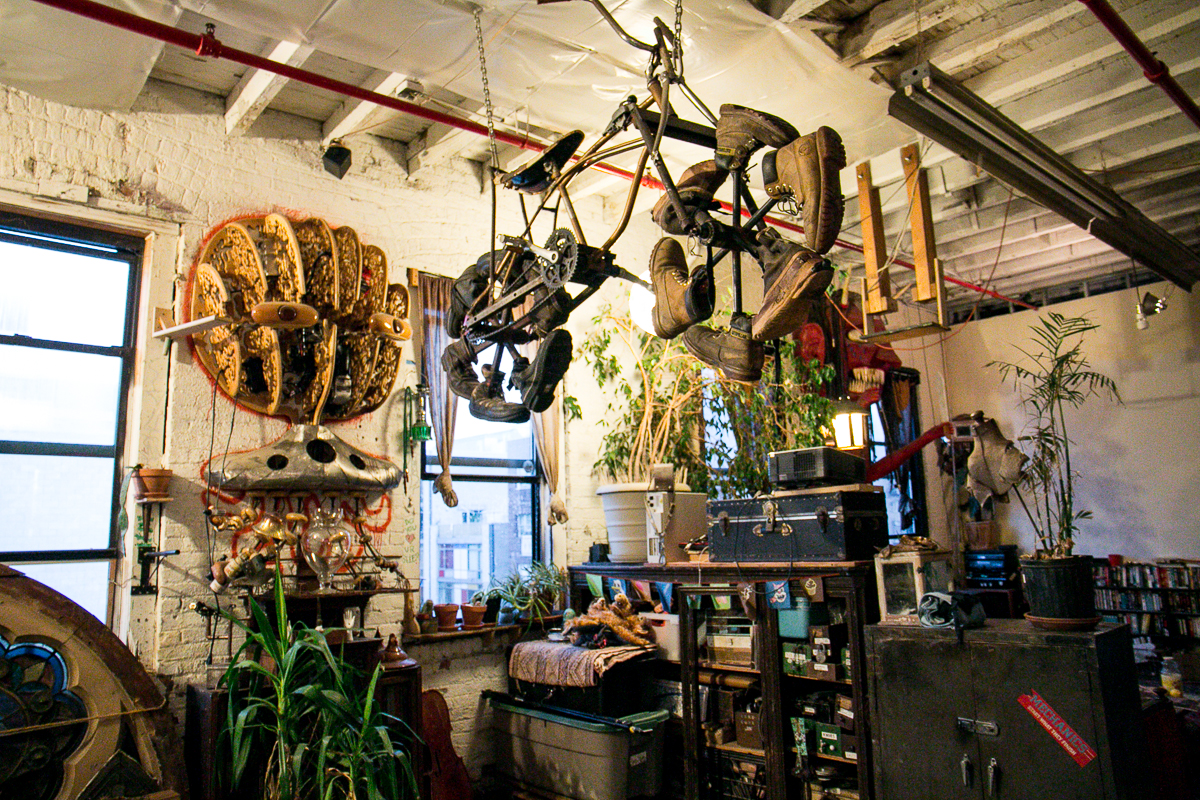