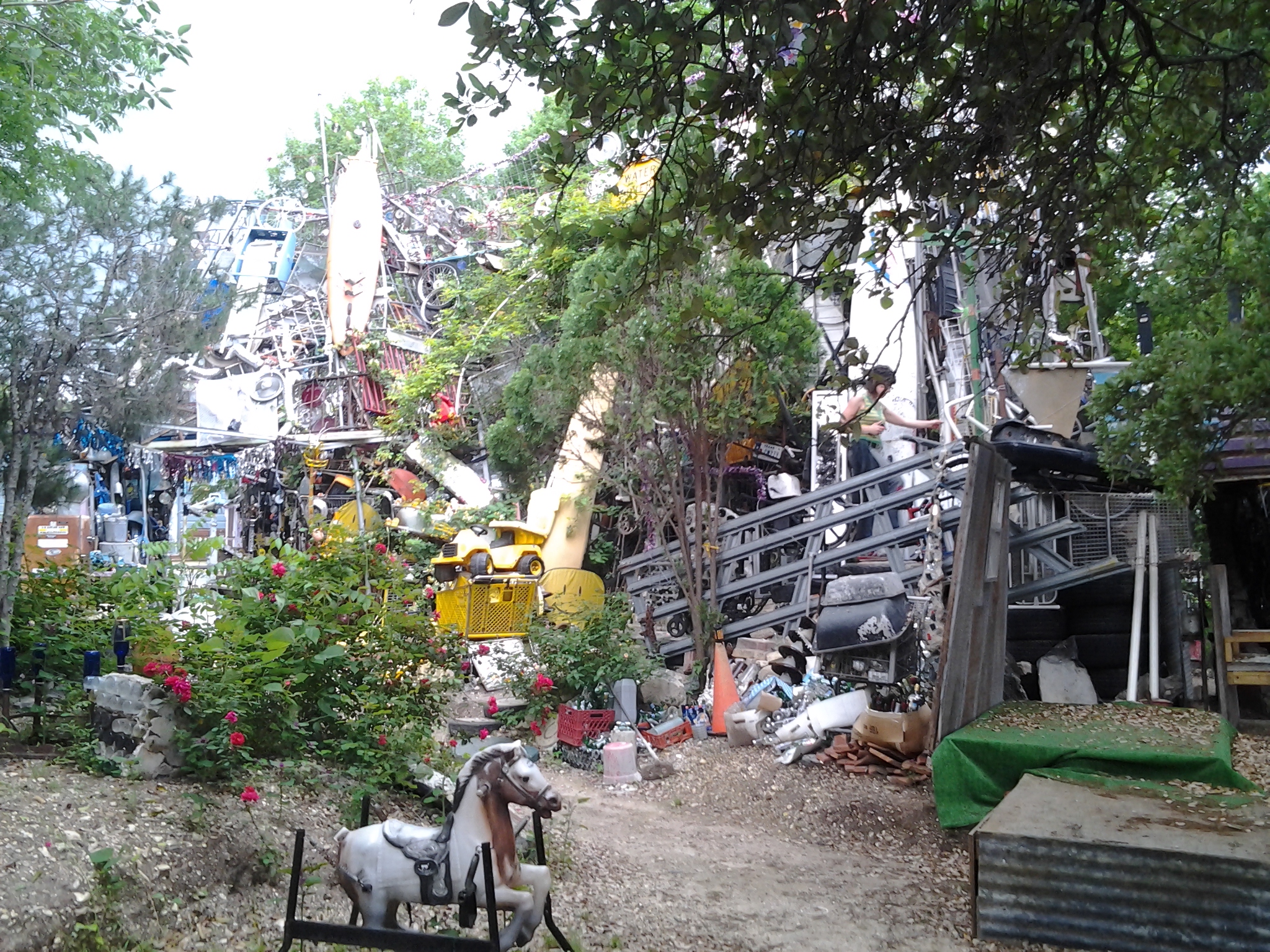 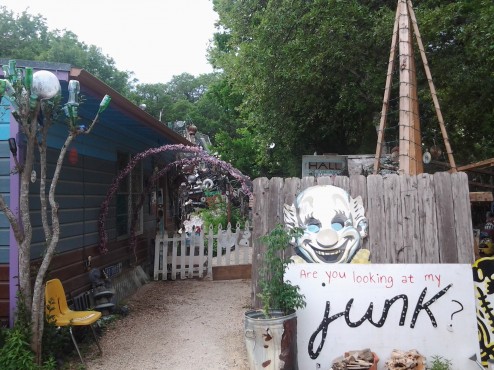 This is my first “honorary Brooklyn” post. I just came back from a trip to Austin with my sister & cousin, and although there were a half-dozen places I’d love to write about if I lived there and had more time—like the 21st Street Co-op, where we cooked for Food Not Bombs, or the massive, gorgeous “Graffiti Park,” where we clambered around in the dark taking photos, or Spider House, where we saw the amazingly creepy Boessi Kreh, complete with a woman erotically kneading bread dough onstage—by far the most spectacularly weird place we went was the Cathedral of Junk. 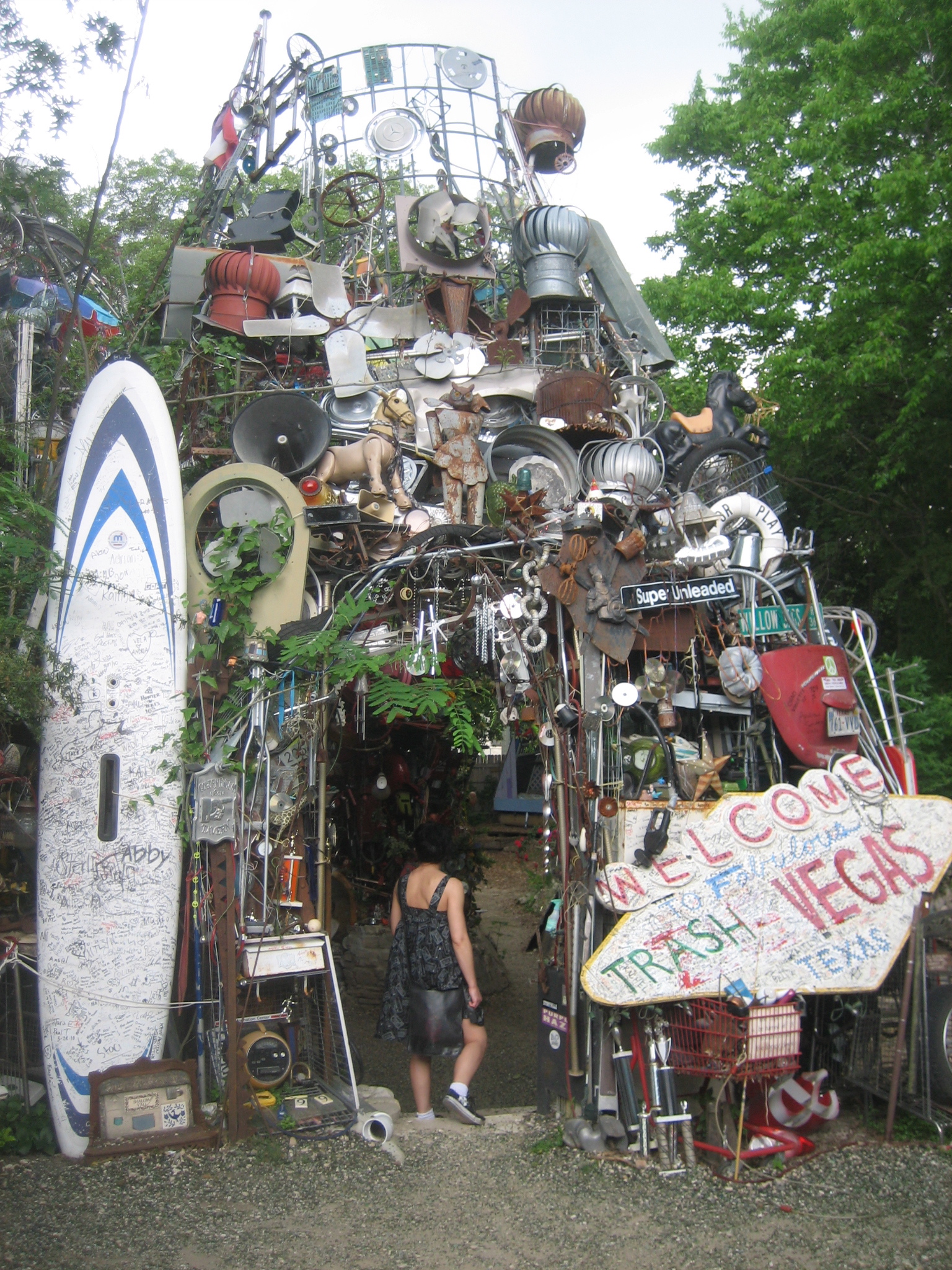 I was strongly encouraged to get to the Cathedral by Bk Spaces photographer Alix Piorun (read her post about it here), but when we brought it up to our Austin friends, everyone said two things: “I think that place got torn down,” and “It’s really really far away.” Neither of these things are true. Although the Cathedral has been threatened with dismantlement and cited for code violation several times, it’s still kicking. And it’s less than a half hour bus ride from downtown Austin. 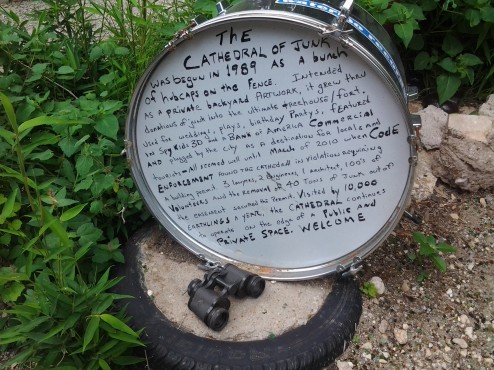 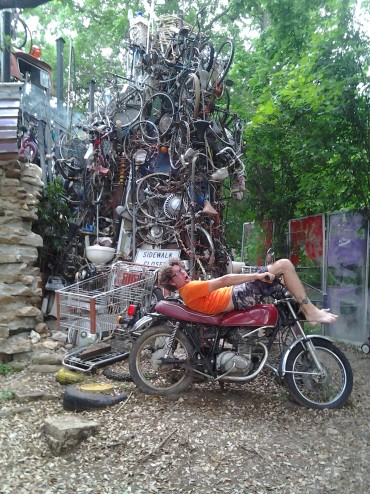 The Cathedral is the project of Vincent Hannemann, a totally lovable curmudgeon who answered the phone when we called ahead, chided us for not banging the gong hard enough when we arrived, and then toured us around the Cathedral himself, scolding us for not being clever enough with our photo poses. He has “JUNK KING” tattooed on his knuckles, told us stories about a few of the bizarre items in the Cathedral (“Oh, that one’s really creepy; my ex-wife made it”), and tolerated our poking around his giant trash statue for a couple of hours. 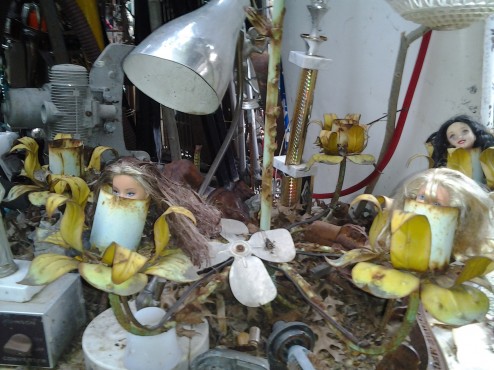 The photos should speak for the Cathedral itself. The main structure is three stories high and has several little rooms. It is made of just about everything you can think of: bicycle parts, lawn chairs, decapitated Barbies, a rusted fridge, crutches, a diving board bridge, zillions of plastic trinkets, cement-filled tires, busted electronics, glass bottles, a box spring, road signs, bathtubs, CDs, broken toys, car seats, shopping carts, and countless knickknacks of all sizes that are a lot harder to identify. There are a bunch of satellite statuettes, a few junk shacks, and smaller sculptures. It’s altogether a fantastic mess, and so so so worth a visit. 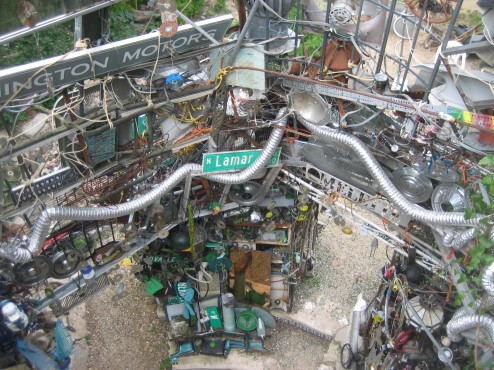 Here’s a whole slew more pix, taken by me and my sis. Enjoy! 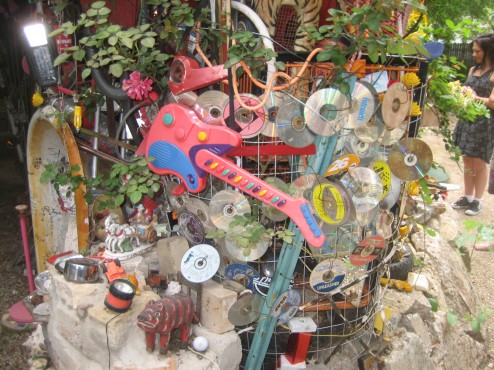 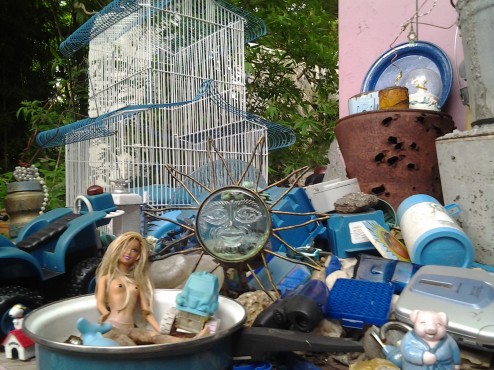 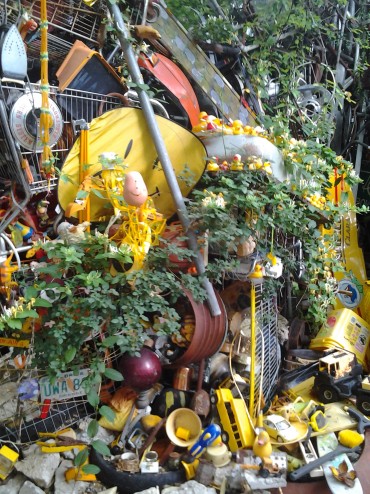 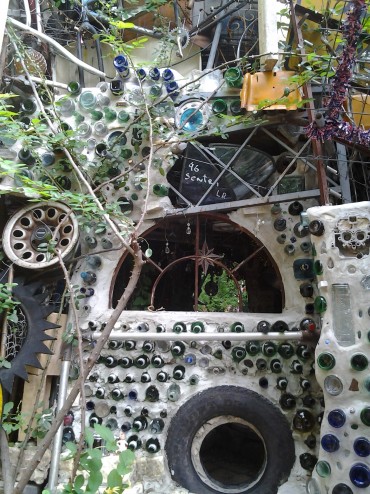 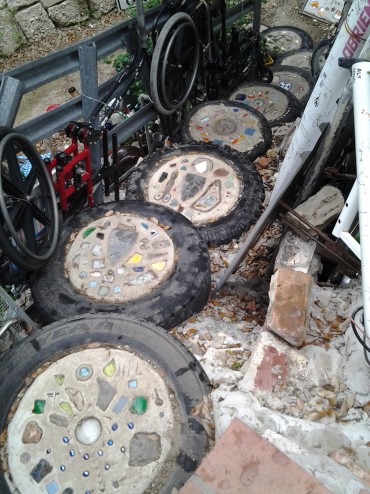 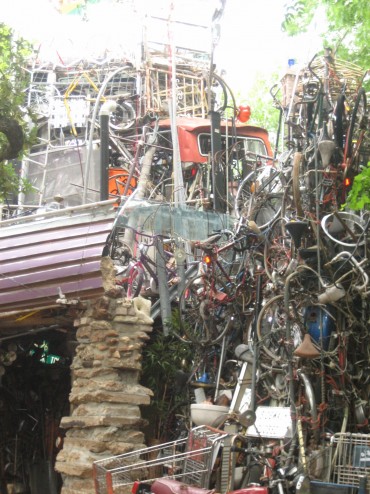 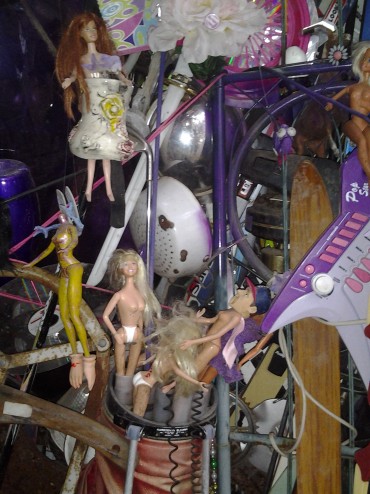 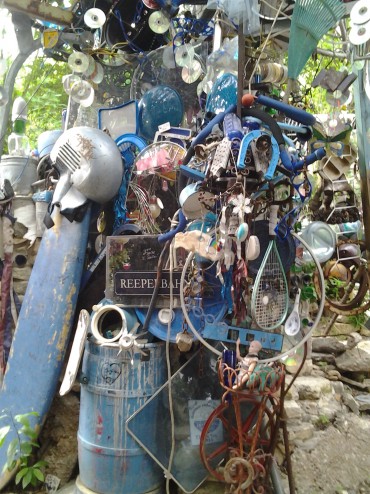 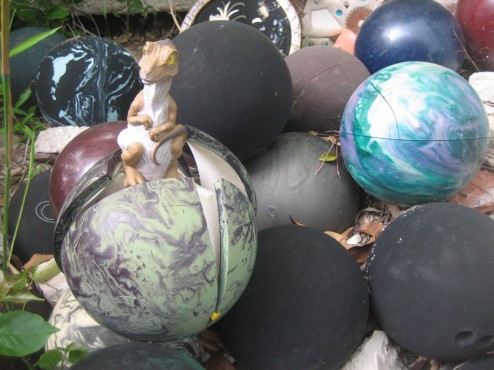 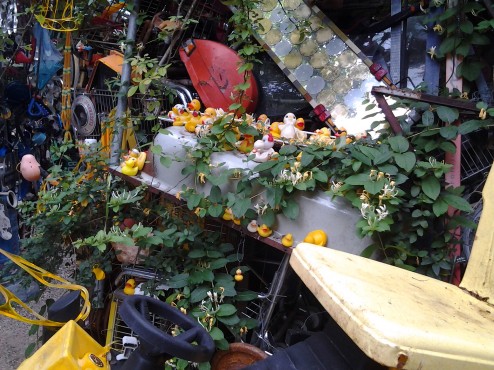 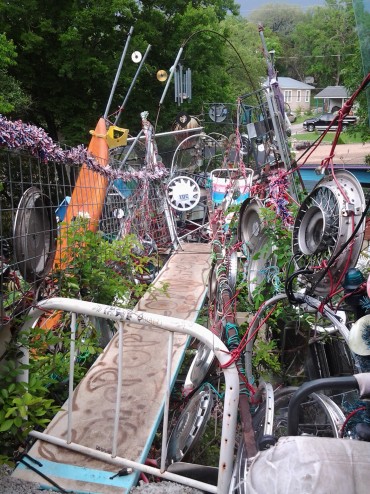 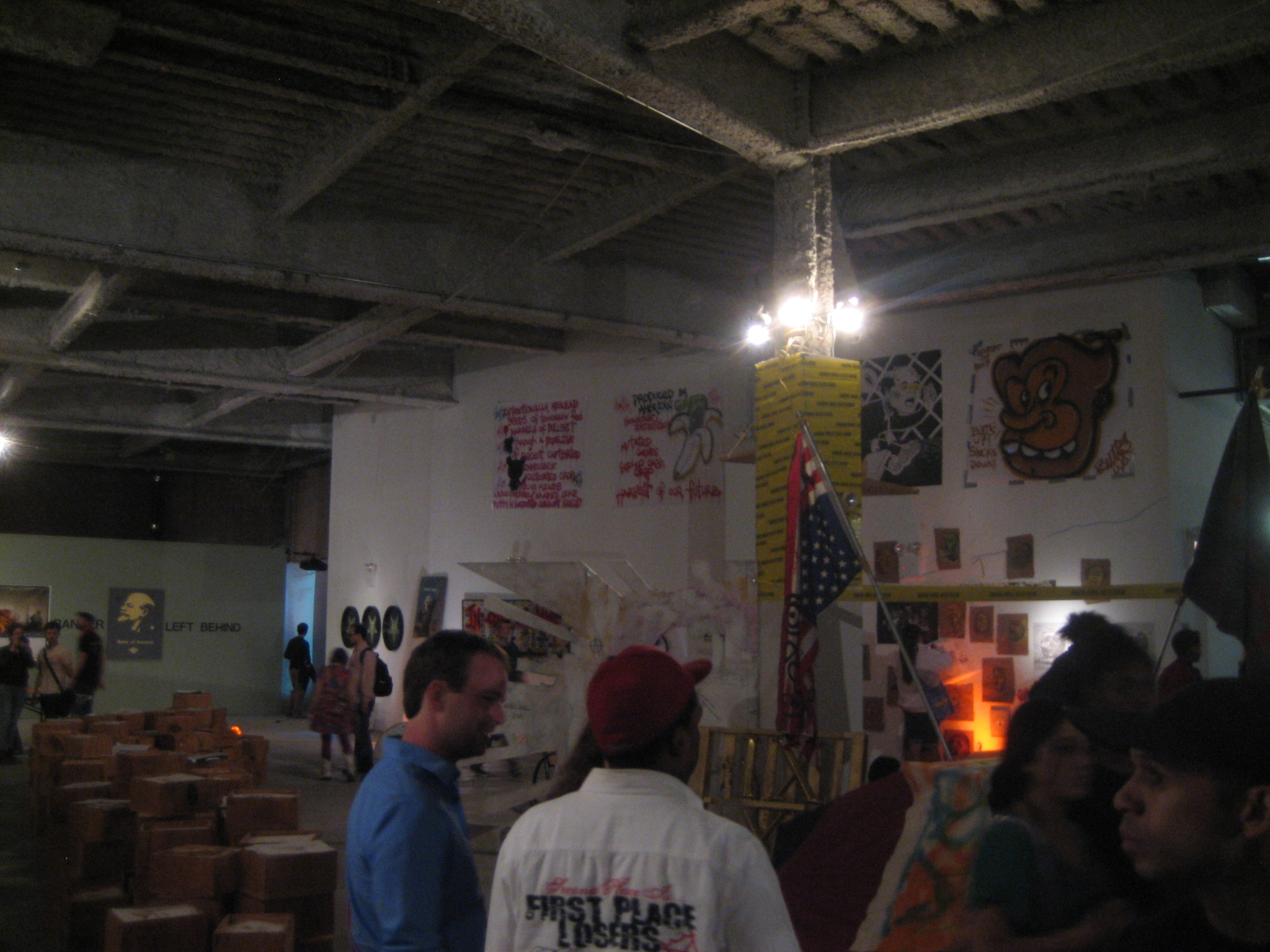