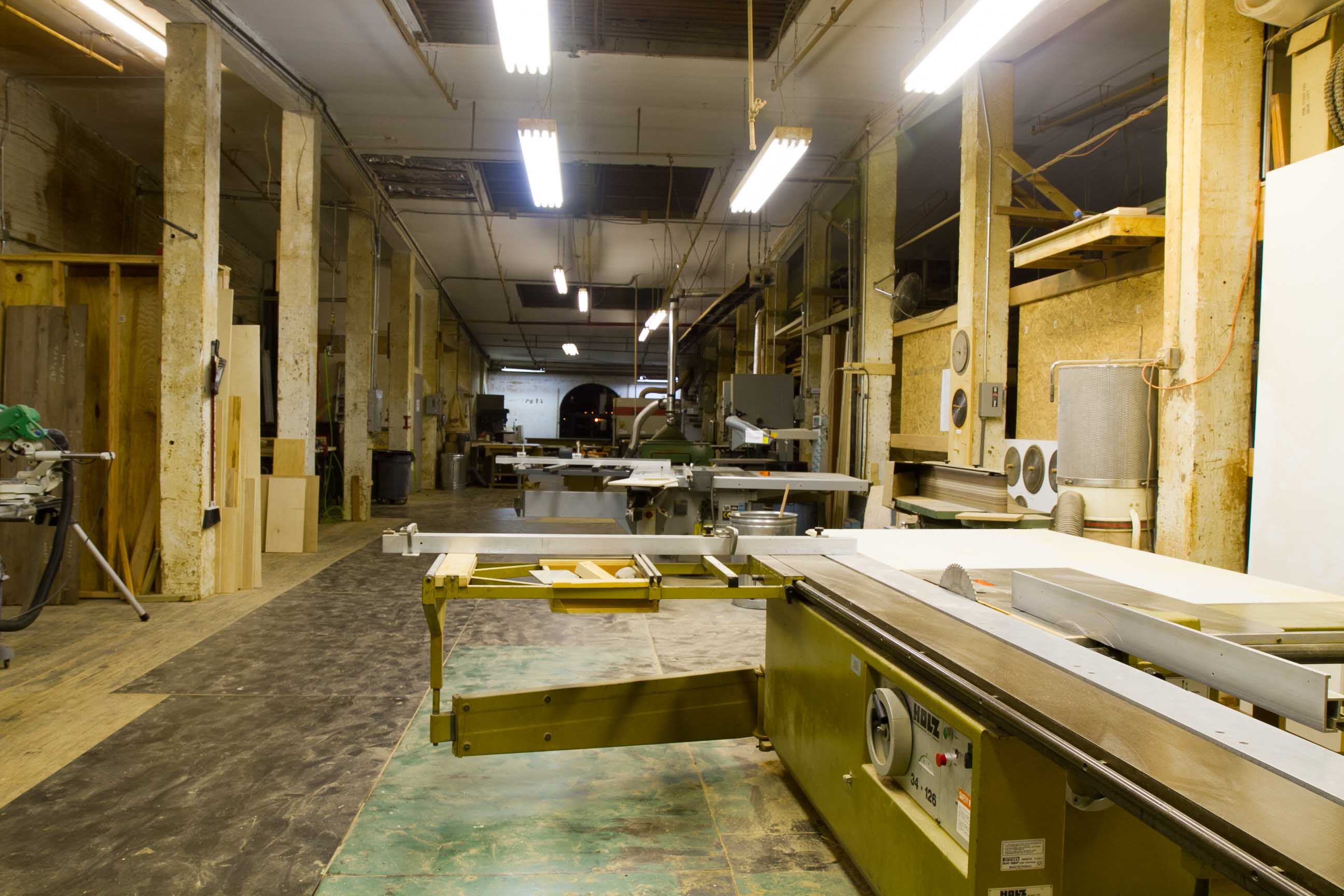 Pickett Furniture is huge. The massive coworking space—in an old import / export warehouse right on the water—is home to a dozen woodworking companies, a couple of industrial designers and prototypers, and the screenprinting company Lunacy Design. In addition to “machine alley,” the vast corridor filled with all manner of industrial saws and giant sanders and other baffling tools, there are individual “bays” for each company, finishing rooms, a full photo studio, and offices. It’s an incredible space. 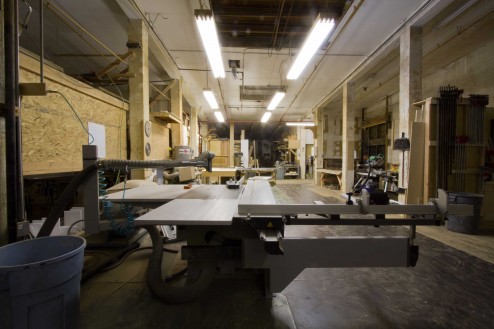 The whole thing is presided over by Jeremy, owner of Pickett and landlord to all the other small companies. He told us to arrive in the early evening so we could catch the sunset over the water from his window, which was excellent advice. In fact, I kept getting distracted during the interview by all the ships floating in and out of view, as well as the great weird music Jeremy played for me (an eighties record called “Ten Ragas to a Disco Beat“) on the incredible stereo console he built himself. 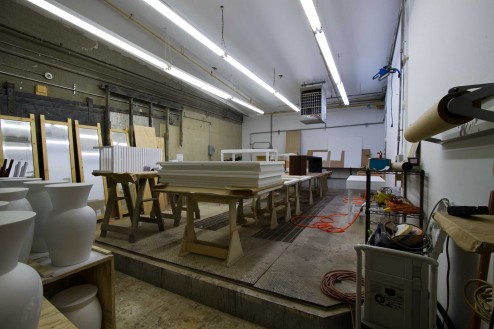 brooklyn spaces: What’s the craziest thing you’ve built lately?
Jeremy: Probably this stereo console. There’s a company in Chicago called ECP Audio, they build high-end equipment for the audiophile community out of tubes, and I’ve been doing their casework for the last few years. Last summer we started talking about doing one of those old fifties-style retro stereo consoles but with audiophile equipment. We created the tube amp together, the tube phono stage, the speakers, and the digital stage, so you can stream your iTunes from anywhere in the room. I also worked with Planet 10 Hi-Fi on the speaker design. The really great thing about the console is it’s only got a five-watt amp. Modern stereos, they all have are like 5,000 watts of power. The really muddy way to create sound is to give it a lot of power but not pay attention to the circuitry or any of the parts and components, which are usually all solid-state. So we took the Pickett Furniture philosophy of really simple furniture and applied it to the electronics, and we were able to create something that outperforms just about any modern stereo. 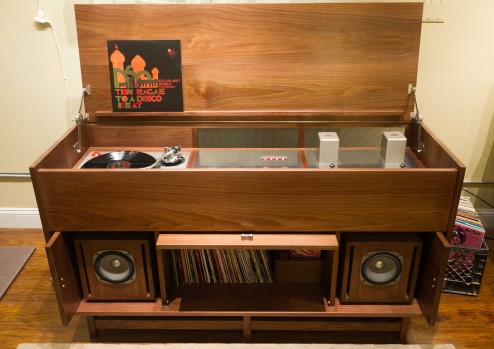 brooklyn spaces: What are some other crazy things you’ve built?
Jeremy: There are a lot of things that were hard but don’t look it, like the chair you’re sitting on. It looks like an art project, but it’s incredibly comfortable, which took a lot of trial and error. These stools weren’t hard to build, but the wood is from the Staten Island Underground Railroad, so that’s pretty crazy.
brooklyn spaces: Whoa.
Jeremy: Yeah, a friend of mine has a carriage house in Staten Island, which was a safe house in the Underground Railroad, and these black locust trees in her backyard were part of it too. They had little markings in the bark that indicated “danger,” “safe house,” whatever. The trees fell down in a big storm a few years ago, so I went out there and brought back as much as I could. 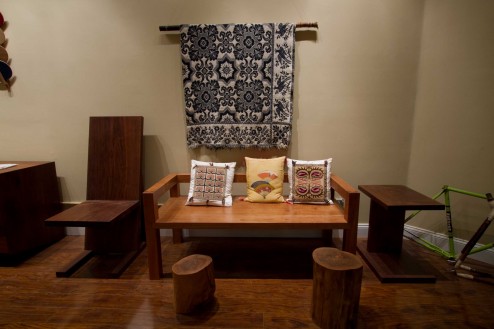 brooklyn spaces: Does that kind of thing happen a lot?
Jeremy: We do try to be very conscious of the materials and processes we use, and we like to be able to tell the story of our wood, from where it grew up to where it was harvested and reused. The oak for the coffee table we’re building right now came down from the John Jay Homestead property up in Westchester, and it’s the same story: these 230-year-old trees fell down in a storm. I used to be in the music business, and I toured Japan quite a bit, so getting exposed to shintoism and the Japanese way of life has really shaped my business. We try not to waste. A lot of our furniture is made out of solid, local woods, and everything’s hand-cut and assembled here. There’s a book called The Art of Japanese Joinery that’s like our bible. 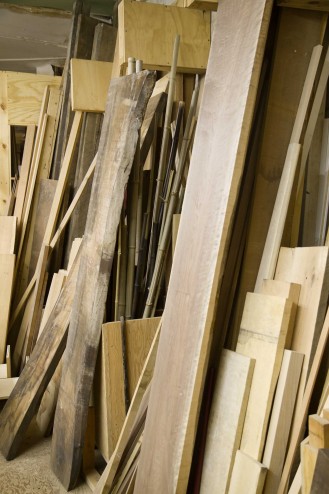 brooklyn spaces: Is it okay to share the name of the book? I don’t want to give away your secrets.
Jeremy: Oh, it’s fine, it’s totally unprofitable to do it this way. But we want to make products that will have a really long lifespan, heirloom pieces that will be auctioned at Christie’s or bequeathed in people’s wills. We think that’s one of the best ways to be green, to create products that won’t wind up in a landfill. People in mixed-use neighborhoods usually don’t like manufacturers, they feel like it decreases property values, pollutes the water, the land and air. But I want to be able to make and manufacture our products here, in the neighborhood where I live, and the only way to do that is to be a good steward of the neighborhood. We donate our sawdust to community gardens for mulching, we sponsor a night at Red Hook Flicks film series, we really try to let people know that we value the neighborhood and aren’t a threat. There are a lot of areas, like Gowanus and Greenpoint, that were plagued by industries that didn’t care what they did to the neighborhood. The factories were owned by people who lived somewhere else, and they trashed the neighborhood and then left. 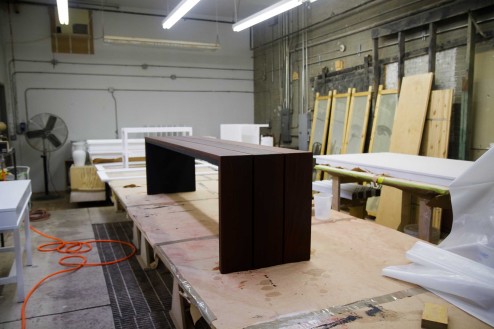 brooklyn spaces: And we’re still cleaning up their messes.
Jeremy: Right. We try to do things carefully, and hopefully that comes through in the furniture, hopefully people who seek out our pieces would rather have a something built by a local craftsman than something made by Ikea robots in a far-off factoryland. My family ancestry is a long line of craftsman, weavers and woodworkers. So there’s a lineage I want to honor. 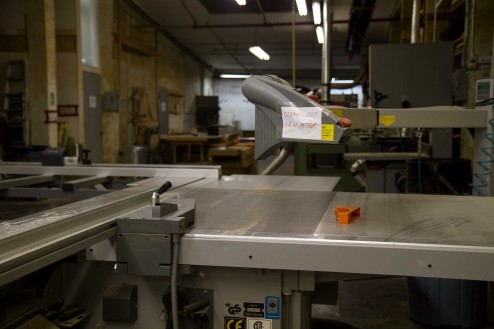 brooklyn spaces: What are your goals for the future of the space?
Jeremy: I just want this to be a place where small companies can continue to work and manufacture. This is such an expensive city, but by all of us pulling together, we can afford to do it. And it’s really nice having other people in the shop and seeing other projects. It adds a real energy and perpetual motion. 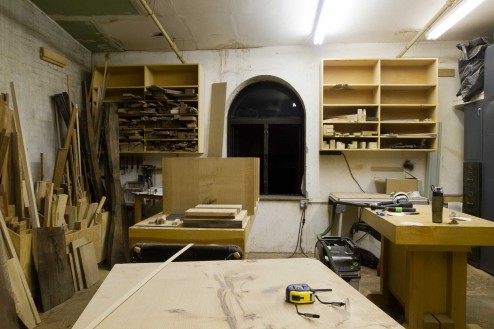 brooklyn spaces: Does being in Red Hook impact your business?
Jeremy: Oh, I love it here. We share this building with Steve’s Authentic Key Lime Pies, which is amazing because the smell always comes in. There’s other great businesses in the neighborhood, like Stumptown Coffee, Baked, Red Hook Lobster Pound. The Dustin Yellin galleries just opened up in an old record storage warehouse. The Red Hook Crit is out here. Often small tours come through; yesterday like fifty people came by with Open House New York, and once in a while Made in Brooklyn brings groups in. There’s very little housing in Red Hook, so you get to know lots of people in the neighborhood. It really feels like a village, and everybody partakes in activities as a village. It’s a fantastic community. Once you find this place, you never want to leave it. 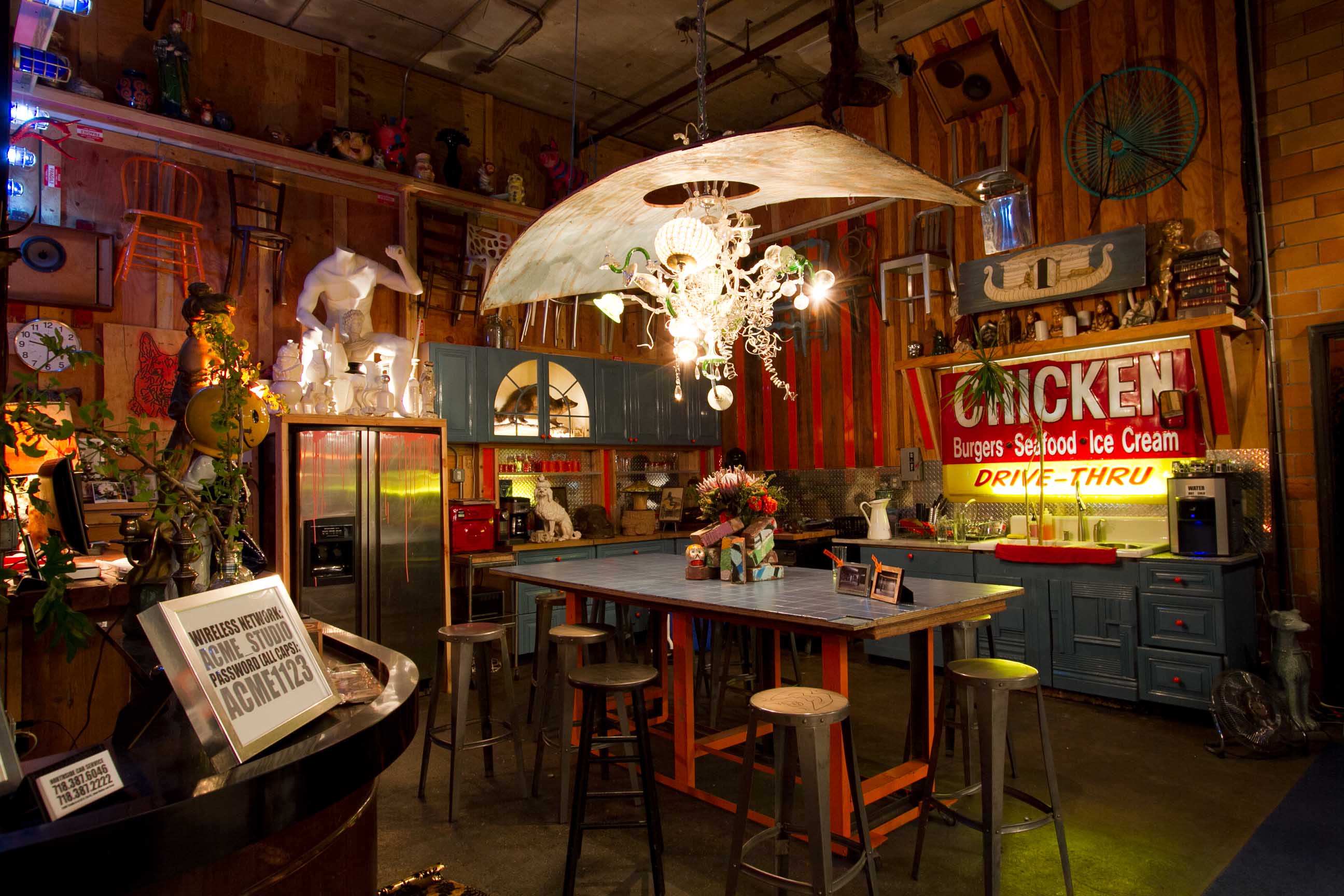 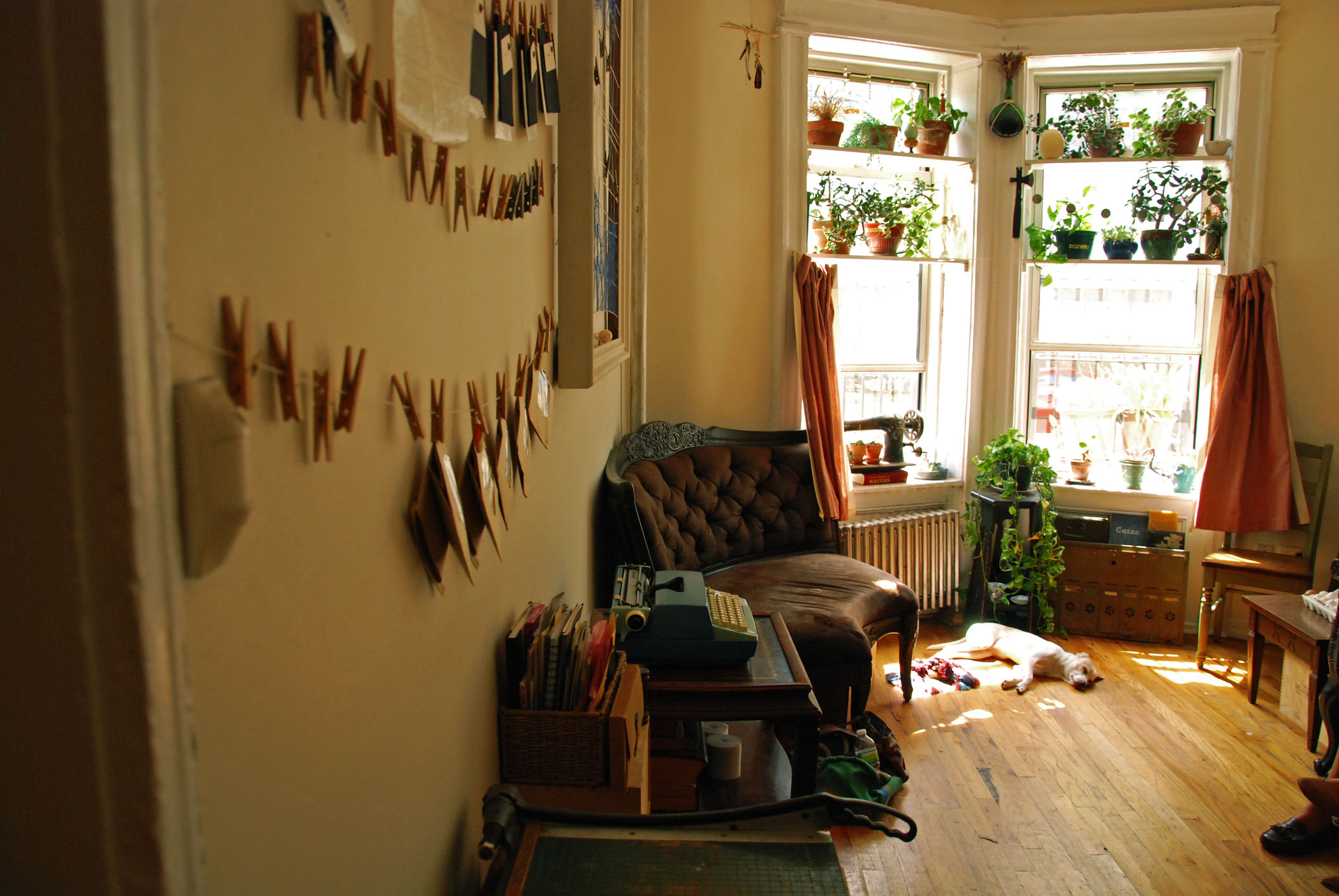 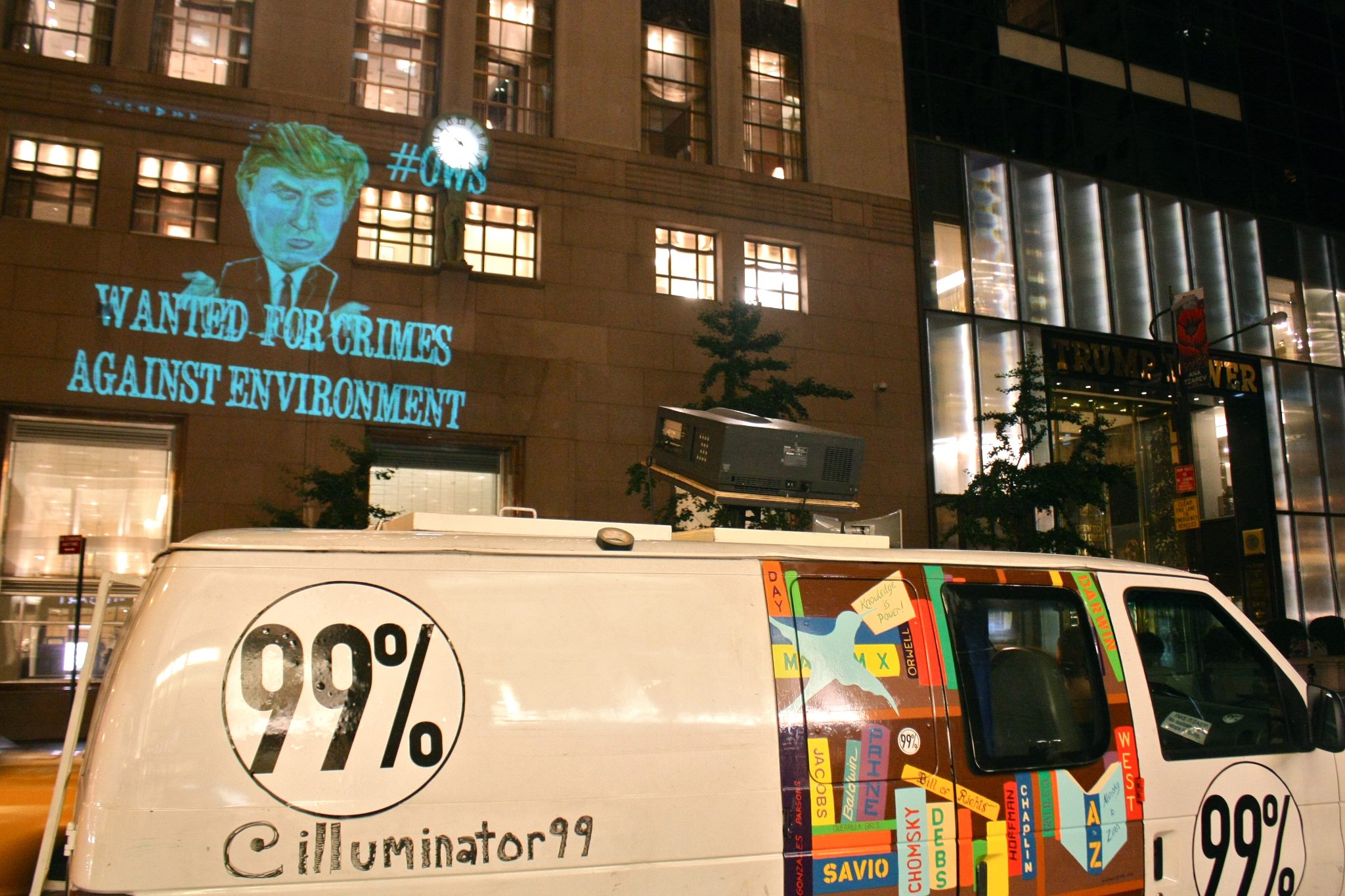