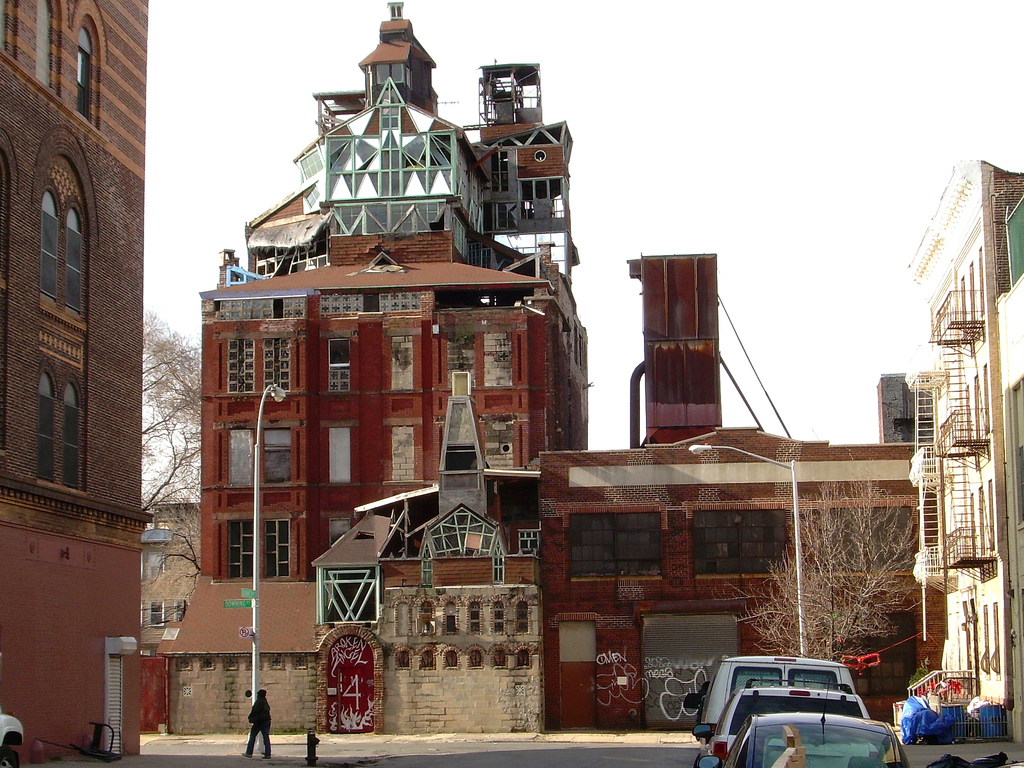 This article was written for Hyperallergic. See the original here.

Most of the coverage you’ll find about the Broken Angel, a handmade architectural marvel in Clinton Hill, begins the story in 2006, when there was a small fire that started all the trouble. That’s the year the tale switches from one about brilliant bohemian artists building their crazy dreamhouse to one about an eccentric old man overwhelmed by legal troubles, shady business partners, and the strangling bureaucracy of the city. 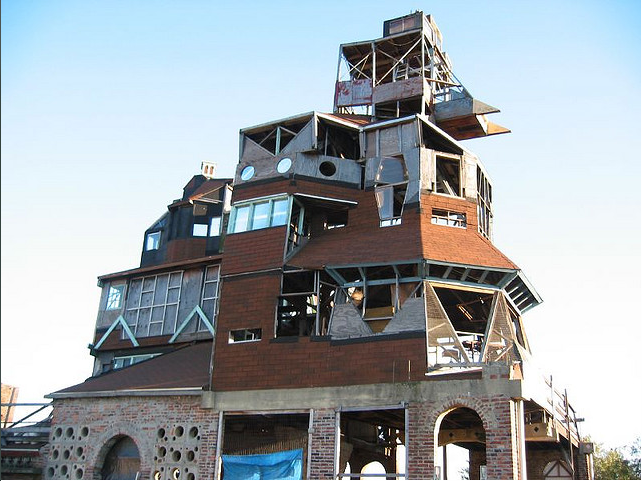 Before I delve into a little history of this incredible space, here’s the time-sensitive part: there’s a block party tonight to say farewell to the Broken Angel, which was originally organized as a small, ten-person gathering but has ballooned to an enormous, two-part spectacle, with over 900 people planning to attend. The festivities begin outside the house itself (4–6 Downing St.) for a family-friendly fête, and will then move to the Irondale Center for a fundraiser turned Brooklyn underground extravaganza, filled to the brim with dancers and performers and tall bikes and DJs and many, many surprises.

And now please read on to learn more about the mad genius whose work is being celebrated. 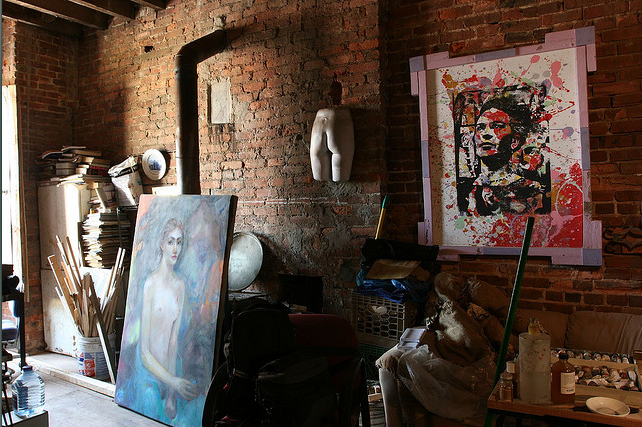 Arthur Wood has been likened to an American Gaudí. The Broken Angel has been compared to LA’s Watts Towers and Austin’s Cathedral of Junk. Borough President Marty Markowitz called it “a Rubik’s Cube of a spaceship.” It’s been termed vernacular architecture, folk art, outsider art, and—naturally, by some—a frightening eyesore. In its heyday, the Brooklyn Angel was surely the most strikingly unique sculptural works in all of New York. Tragically, much of it has been dismantled in the past decade, and what’s left is not likely to last much longer. 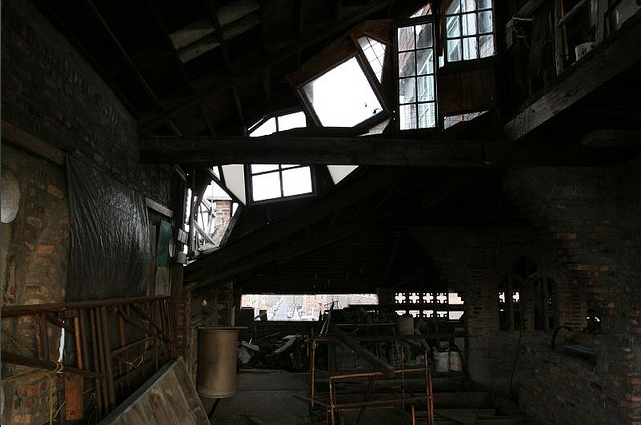 Arthur Wood (who is now 84) and his wife Cynthia (who passed away in 2010) bought the former Brooklyn Trolley headquarters at a city auction in 1979. They paid a mere $2,000 for the four-story, 10,000-square-foot building. And then they began to turn it into art.

According to Shannon Kerner, a close friend of Arthur’s, the Woods began by tearing out the walls and floors and creating many different-sized rooms, some four sweeping stories high, others only five feet. The main staircase was a series of ladders and bridges. Most of the wood and other materials used were salvaged from the streets and garbage dumps, and the space was filled with handmade stained-glass windows Cynthia created from found glass and bottles. In the basement Arthur built a hot tub with a waterfall. And the best-known element of the Broken Angel was on the roof: the Woods constructed a spectacular forty-foot wood-and-glass sculpture on a mirrored platform, which made the whole structure seem to be floating in the clouds. 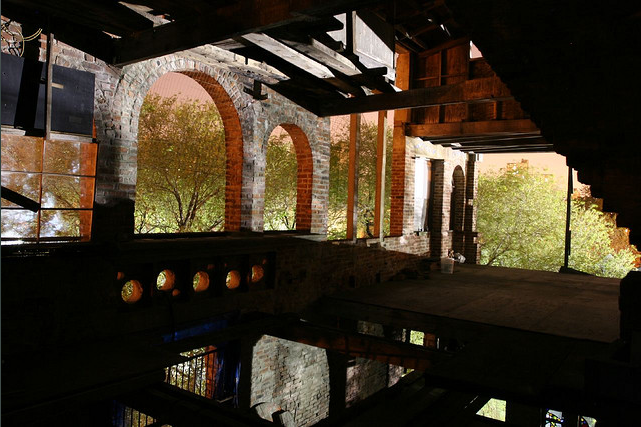 The roof structure branched into two towers. The front one had a huge camera obscura which gave a 360º view of the neighborhood (seven flights up!). You could see blocks and blocks in great detail on a huge white linoleum table scavenged from the street. There was a sweet wooden deck up there too, for stargazing (Arthur loves inventing star-gazing equipment) or hanging out or making art. The back tower was a cool sculpture; you couldn’t hang out on it so much, but you could tangle yourself in its branches (I use the term “branches” metaphorically). In the back there was also another deck that was all stucco, it was like being in the Southwest U.S. The house was an amalgam of all kinds of amazing environments! 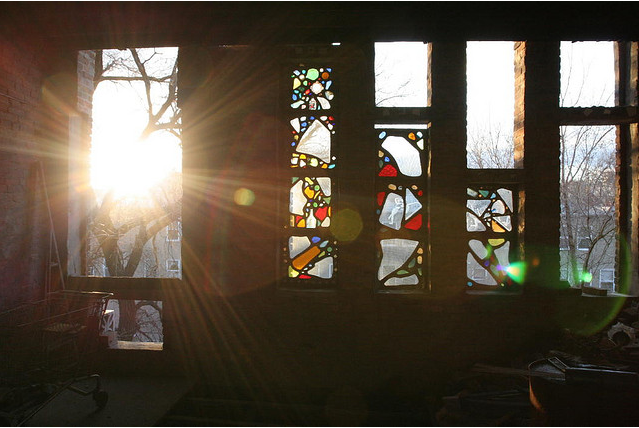 Brandon Stanton from Humans of New York, who interviewed Arthur in 2011, said, “Arthur’s sparkling ideas were built with other people’s trash. The concepts were towering and glistening. The realities were made of plywood.” The Woods spent decades creating their masterpiece, finishing major construction in 2002. On their son Chris’ Flickr page (from which all the photos in this post are taken), he said his parents “creat[ed] a home which brought mystery, magic and magnificence to a small cul-de-sac in Brooklyn.” The Village Voice deemed it the “Best Urban Folly” of 2001. In 2002 the New York Times wrote: “Depending on the angle, Broken Angel may resemble a blimp impaled on a church or a laboratory from which some mad scientist might launch a pedal-driven flying machine.” In 2004, Michel Gondry used the Broken Angel as the backdrop for Dave Chappelle’s Block Party. It represents the kind of fantastic treasure that revitalizes your excitement about your neighborhood, that renews your faith in art triumphing over everything—up to and including reason. 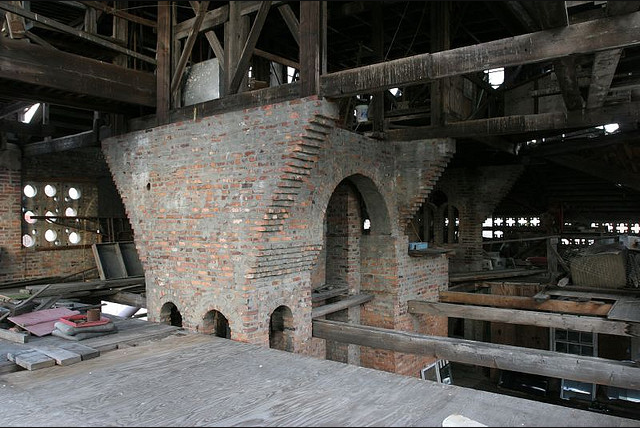 And then in 2006 there was a fire. It was small, on one of the top turrets. There was minimal damage and no one was hurt, but that was the point when things began to go downhill. The firefighters on the scene deemed the building unsafe to enter, and the Department of Buildings was notified. They immediately ruled the place unfit for occupancy and evicted the Woods, who were arrested a few days later when they refused to leave. To bring the building up to code—including tearing down the forty feet of additional structure on the roof—would cost around $3 million. 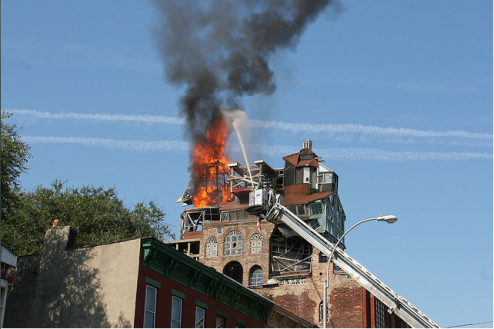 The community rallied around the Woods, including Pratt architecture professor Brent M. Porter, who, along with seven of his students, tried to prove that the building was, in fact, structurally sound. When that didn’t work, the Woods partnered with real estate developer Shahn Andersen to bring it up to code and convert it into condos and art studios. This was a hopeful moment, where it seemed that Arthur’s full vision for the Broken Angel would finally be realized, saving the fantastical space and even opening it up to artists and the community. 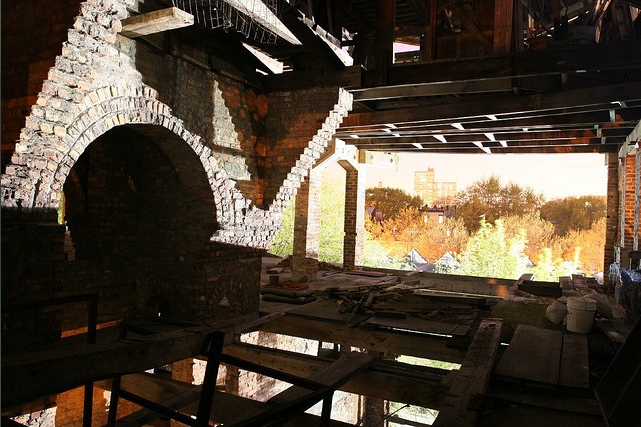 On Brownstoner, a commenter named phyllyslim recently talked about having considered joining the project, and the plans Arthur had for it:

The building was [going to be] transformed into a “museum of light” as he termed it… There was to be a parabolic dish in the cellar where light from a prism in the then existing cupola would be directed… There was to be the “cathedral of light” in the front addition where schoolchildren would come to play with interactive exhibits in light, and much more.

In addition, Brownstoner reported at the time that Arthur planned to cap it all off by creating a huge whale out of an old helicopter and hanging it from the building.

After the fire, the Chris Woods wrote, “Many of you wonder what the hell my parents are doing with that building. They have always been building an outline of a dream.” And sadly, as with most such spectacularly unlikely dreams, this one was not to be. There followed three years of complicated legal and financial troubles, with loans defaulted on, trusts broken, promises unkept, and money gone missing. Shahn and Arthur went from collaborators to litigious enemies, and the property was foreclosed upon by the lender, Madison Realty Capital, in 2009. By then Broken Angel had been mostly gutted, the majority of its superbly unique elements removed. Shortly thereafter, in 2010, Cynthia lost her long battle with cancer. Arthur has been in and out of the building ever since. 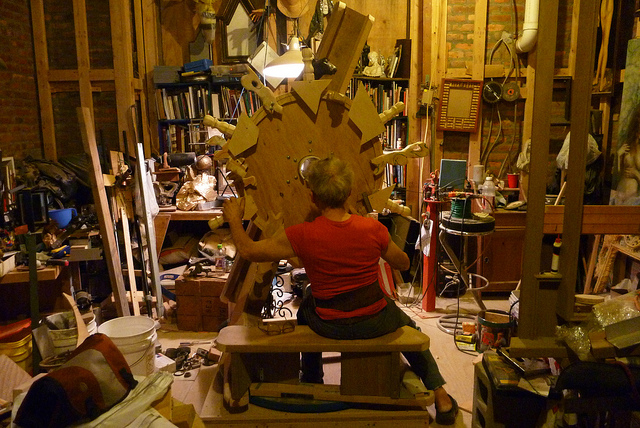 Many feel that Arthur has been unfairly treated by the city and its emissaries. Arthur himself believes the Department of Buildings started the fire in order to come in and condemn the building. In 2007, Brownstoner noted “the intense level of scrutiny and apparent lack of straight dealing [Arthur and Shahn] received from both DOB and the courts,” and Chris wrote: “The department of Buildings and the City of New York should drop their campaign of harassment and recognize that Brooklyn wants the building that Arthur Wood envisioned, not another boring box of bricks. Why is our building under such scrutiny while other buildings in NY have actually collapsed?” 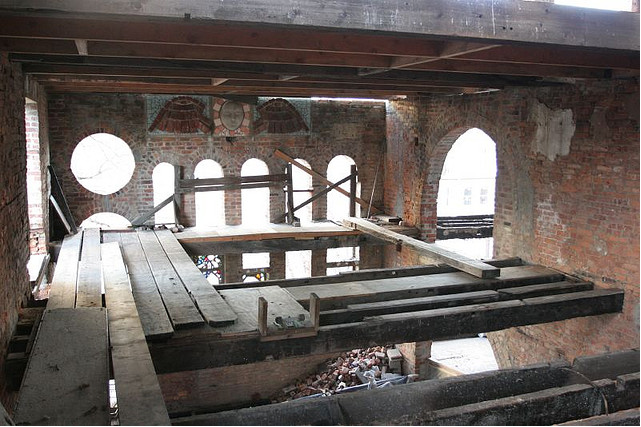 And the fight to goes on. Says Shannon, “This type of structure belongs in New York, in Brooklyn. We need places like this! Instead of tearing it down the city should have worked with him to preserve it, make it safe to their standards, sure, but make it better.” Shalin Sculpham, another friend of Arthur’s, told the New York Daily News, “It’s one of the weirdest, most beautiful buildings in New York—and his life’s work. And it’s being taken away.” 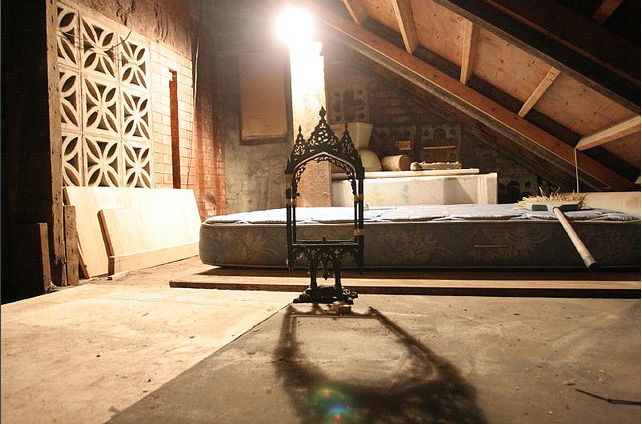 Now the city has given Arthur one more final notice, so barring another stay of execution, March 30th, 2013 will be Arthur’s last day in his home of nearly thirty years. Shannon says they chose to have a block party to give people a chance to say farewell to Broken Angel, “to wish Arthur well and maybe sing him a song or dance him a dance or do something to show their support of the situation. They could bring all their favorite memories of the space, shake his hand, share some cookies…” Chris has said that they would like to put together a time capsule to hide in the building, so people can bring something small to contribute to that. Ever hopeful, friends have put out an open call for (pro bono) legal help (contact brokenangelbk@gmail.com to get involved!), and a donation page has been set up, in the hopes of raising $50,000 to keep on fighting.

So this could really be the end of Broken Angel, but people have been saying that for nearly a decade—if not longer. Arthur is old now, and tired, but he’s still feisty, and he has support from many different corners. And after all, for someone who created the miraculous Broken Angel out of salvaged bottles and boards, would it be so unreasonable to hope for a few more years to keep creating miracles within it? 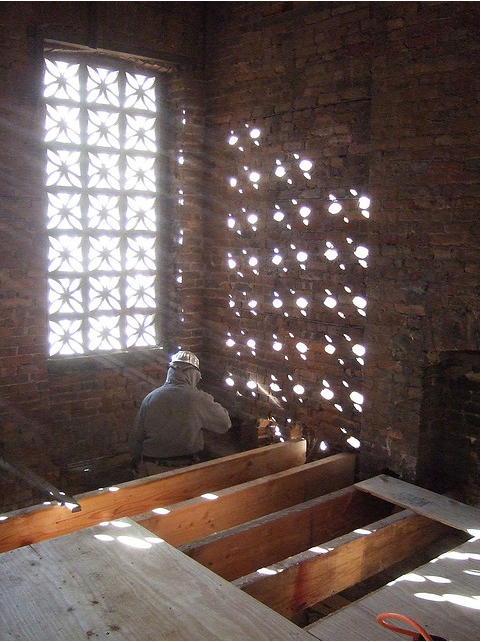 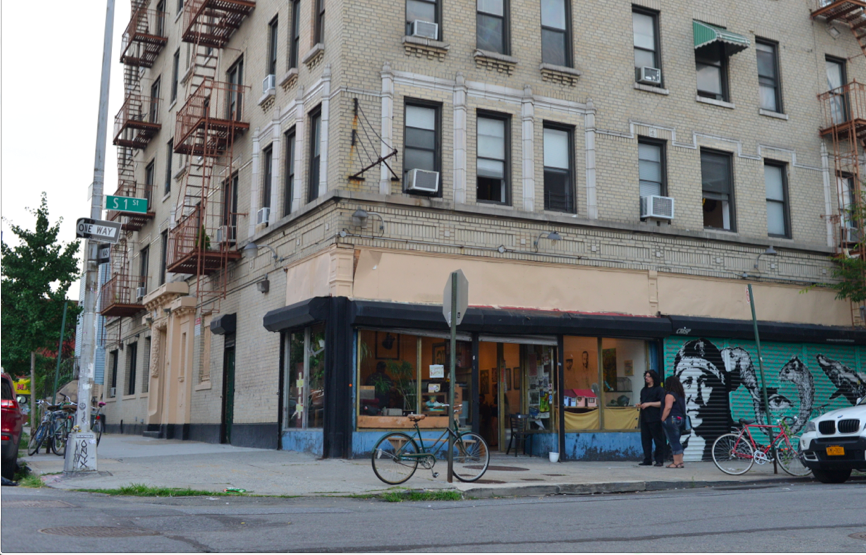 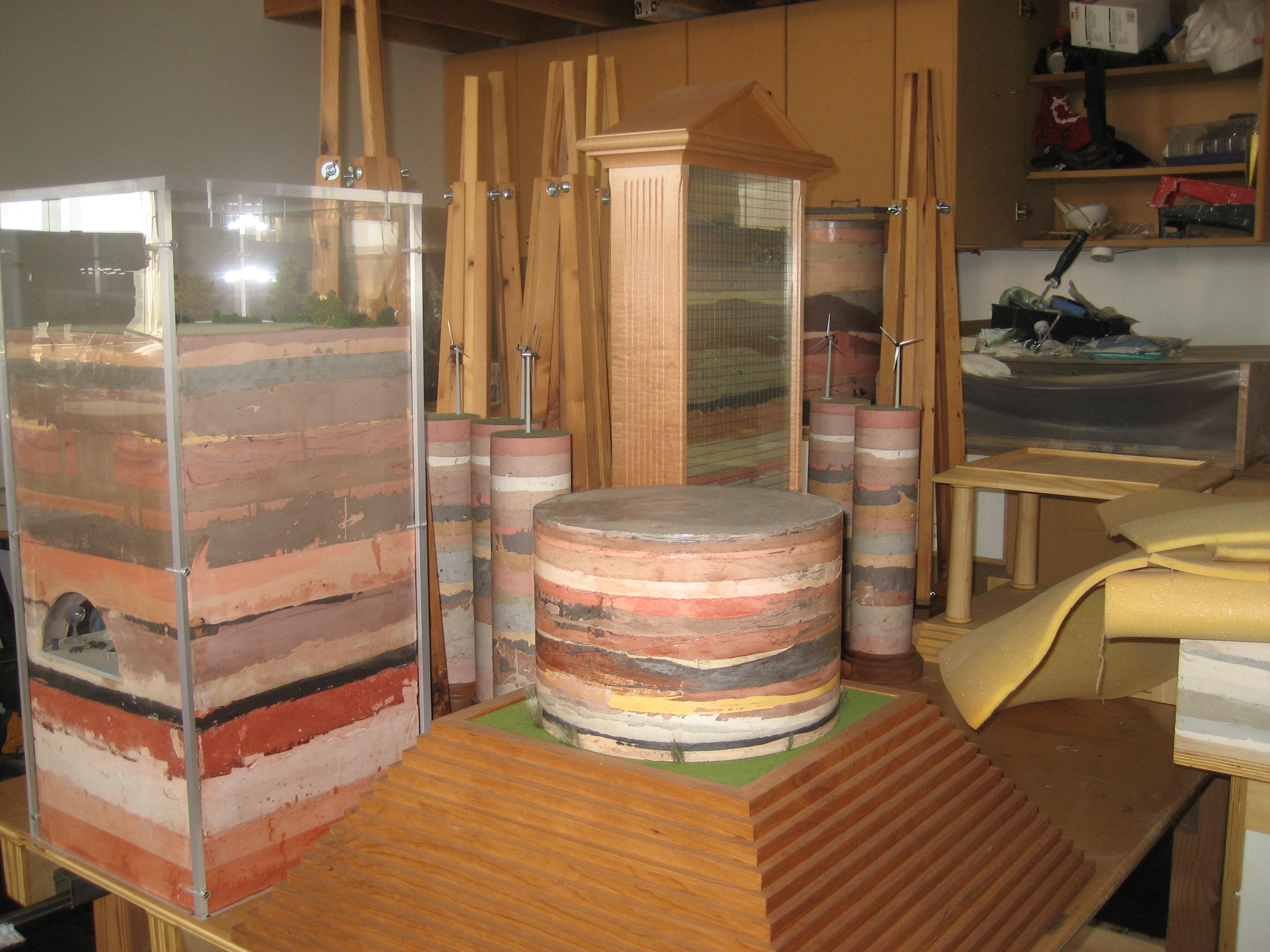 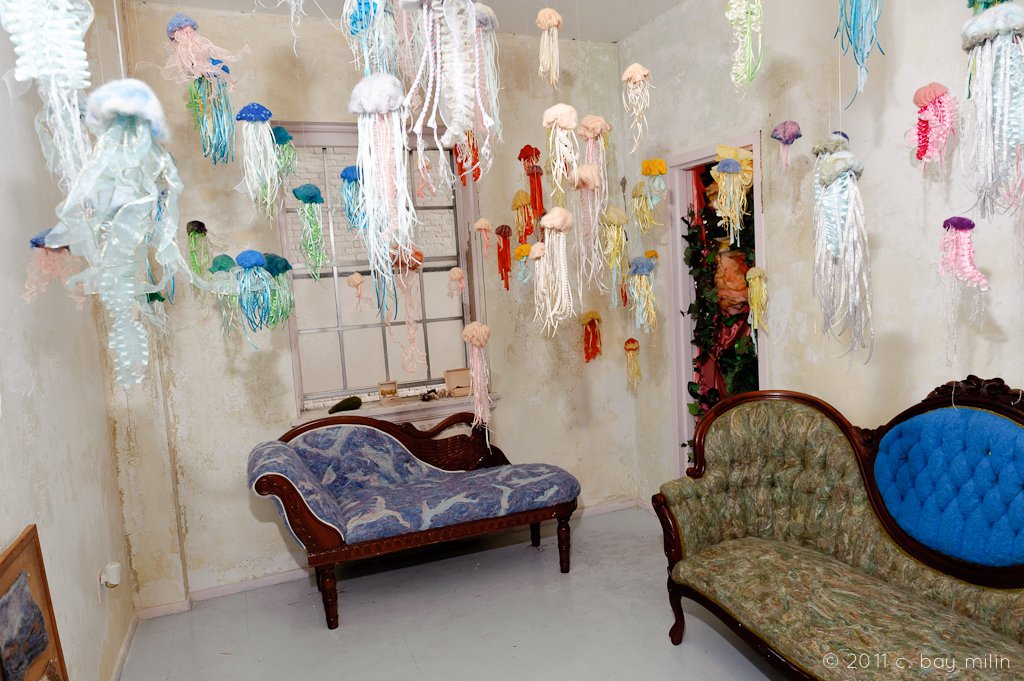